I now step backwards in time to fill in some of the gaps of my story by talking about my early life with my parents and grandparents.

My father was born in 1924 in Toronto, Canada. He rarely speaks of his past, so I know 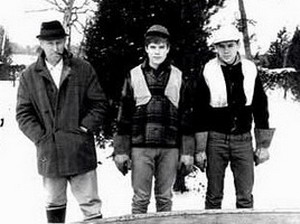 little of his early life. I do know, however, that his mother, Mary, died when she was in her thirties. She left three young children: two sons and a daughter. My father was the middle child. Both the older brother and younger sister are now dead. My paternal grandfather was named Francis. After the passing of his first wife, Mary, he married a lady named Able. I have no memory of Able, but I do have a photo of Francis and Able together. The only memory I have of Grandfather Francis is riding with him on a bus in Toronto. Other than he produced my father, grandfather Francis had no direct influence on my life.

My father was a passionate outdoors man, which is where I get my love for the wilderness. He would take the family camping every summer, way up in Northern Ontario. It was never good enough to go to the regular camping areas. Oh no, we had to go to wilderness camp sites, old mining, logging and hunting camps. We even carried heavy planks in our trailer just in case we had to them lay down over the road to pass. I can remember my mother’s voice, “Oh! Oh! Oh”! as we attempted to cross some impassible piece of road to reach some God forsaken destination! I have photos of those wilderness camps. My mother is smiling, but you should have seen her face as we struggled to reach these places! 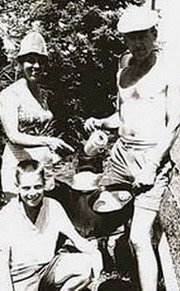 My father quit high school prematurely in order to join World War II. Consequently, he never completed his education in his youth. He spent three years in England during the war working as an aircraft mechanic and bomb loader. One day I discovered a German Luger, a kind of pistol, and a German belt buckle hidden away in the attic of our house. I was fascinated to read the inscription on the buckle: Gott mit uns, God with us. As a boy I thought it was strange that both armies called upon God to bless their effort. I guess these two remnants of the war were my father’s mementos.

To my father’s credit I remember him sitting at the dinning room table every night struggling to finish his high school diploma. Twice a week for years he attended night school. In this way he gradually completed both grade twelve and thirteen. Calculus was his most difficult subject and I remember that he failed twice before he finally passed. He just would not give up until he accomplished his goal. In the end he successfully completed his high school diploma. Today this is the equivalent of high school plus one year of university. It was a big achievement for my father and I am sure that I learned determination and tenacity as a result of watching his struggle. There was no practical reason for him to take the time to finish his education, but he valued learning above all things. I remember him insisting that I complete my education to the fullest. He did not care what I studied so long as I studied. Most fathers would not have tolerated their sons spending the most important years of their life studying a subject as obscure as Sanskrit. But from my father’s perspective, so long as I was in college and studying something that I enjoyed and doing it well, he was satisfied. I remember him saying that even if I wanted to be a bank robber I would be a better one if I had a college education. So he insisted on a college education for me, but what I studied was my business. My father allowed me to follow my passion. He never interfered and always supported me to the fullest. I love him for this single aspect alone.

After the war my father took a job with the local telephone utility. The year was 1946. He stayed with this company until he retired in 1997. That is over 50 years with the same company! Similarly, he lived in the same house at that he purchased along with my mother after they married. We never moved. My parents still own and live in that house today. They paid $11,000 in 1951 and today it is worth a small forture. My parents acquired wealth, not because they were aggressive business people or shrewd stock investors, but because they saved and saved and saved. From the day my father started work and received his first paycheck he bought stock every month without fail. My parents never bought new cars and always lived a frugle lifestyle. They are both the product of the great depression and what they have accomplished in life is the result of steady work.

The most important influence my father had on my life was his personal example of stability and hard work, his passion for the rural life, and above all, his love of learning. Thank you, dad!