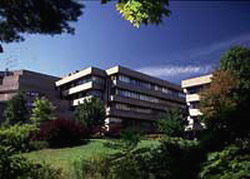 I entered the University of Toronto during the fall of 1972 at Scarborough College. The U of T, as we called it, is made up of eight colleges, six of which are on the main campus in downtown Toronto and the remaining two are in the suburban areas. Scarborough College is the eastern suburban campus. I was not happy. It was just an over grown high-school and I had to take courses that bored me silly: English, geography, sociology, philosophy, psychology. I had to sit in a huge lecture hall with 150 other students and listen to some professor talk. You needed binoculars just to see him. What a waste. I particularly remember my philosophy professor showing up with a coffee cup in one hand and a cigarette in the other. He chained smoked through the entire class all year long. My youthful expectation was that philosophy was a matter of high culture and subtle thoughts and so I considered this kind of activity in front of 150 young students to be contrary to the ideals of philosophy. And I had to pay to watch this person tell me about Descartes! The only thing that saved my year was my one Sanskrit class that I took at the downtown main campus. It was held for three hours twice a week in the evenings. It took me two hours to travel there from the Scarborough campus, but it was worth it. Only eight students were in the class. Now this was education! The professor was Jeff Mason, a feisty opinionated man who breathed life into my university experience. I loved his class. He turned me on to ancient India. 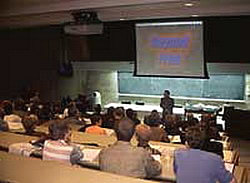 downtown campus where the real university was happening. I became a member of University College, the oldest and most prestigious college. Now I was finally at university! I loved the downtown campus with its cosmopolitan flavor. I became a full time Sanskrit specialist with a minor in art history. I was finally in my element and I never again received a grade less that A. I was determined to learn Sanskrit, so I spent hours and hours concentrating on this language. I especially loved to browse the library and immerse myself in books. This was the best time of my life. Meanwhile I had another life going on, the one at the temple. Once I had transferred to the downtown campus I was within walking distance of the temple. I could go there in the morning before school, catch some of the japa (chanting) period, have breakfast and then walk to the university. I could even stop in on the way home in the evening. The walk was only 20 minutes. 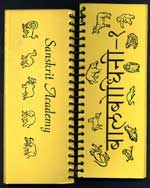 It is interesting that Krishna Consciousness and Christian Evangelics are of the same mind set. Of course, the Christians flatly reject Hinduism as the work of the devil, but still, the black and white, either/or, literal mind set of the two groups is identical. Even the mind set of Jewish or Islamic fundamentalism is identical. It is all based on a literal interpretation of scripture. Fundamentalism is basically the same across the religious spectrum.

What I was learning in the university through my Sanskrit studies was diametrically opposed to what I was learning at the temple. One was based on modern rationalism and the other was based on religious fundamentalism. And there is a huge chasm that separates the two. As a result I suffered inscrutable intellectual and emotional agony that would take decades to resolve. You know that Hare Krishna devotees reject evolution, but did you know that they also deny that man went to the moon? Did you know that the sun is closer to the earth than the moon according to Krishna Consciousness? Krishna Consciousness is even more extreme than modern religious fundamentalism. It is medieval fundamentalism. This will become apparent as my story proceeds.