In the early years of Krishna Consciousness I felt that I was the sole lay member of Toronto’s Krishna temple. Visitors came and went–curiosity seekers, draft dodgers, hippies, fugitives, gays–people of every flavor. Most of them were from the street. I felt 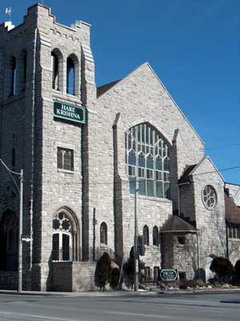 alone, but somehow I kept coming. I enjoyed learning the philosophy and listening to the

chanting and singing. A few times I became discouraged and stopped coming altogether; then I would meet the devotees on the street and be convinced to return. The devotees did their best to encourage me to move in, but nothing worked, so eventually they gave up and accepted me as Bhakta Brian, the first member of Toronto’s Hindu community. The Hare Krishna temple was the only Hindu temple in Toronto at that time.

There was no middle ground in the early days of Krishna Consciousness. You were either a full time devotee or a casual visitor. All too often I witnessed the following scenario: a married couple would become interested in the temple, but only one spouse would show a keen interest, the other would have little or no interest. The temple devotees would encourage the interested spouse to move into the temple even if it meant abandoning their family. No concern was shown to keep the family together. The disinterested spouse was branded “maya.” Immediately a wedge was driven between husband and wife. Whole families were torn apart in this way. I saw many children left fatherless or motherless. I was shocked. Similarly, I met many run away teens who would come to the temple hiding from their parents. The devotees gave them shelter, and when the parents came looking for their sons or daughters, the devotees would shuttle these teens off to another temple and hide them from the parents. The parents were maya. The devotees showed absolute callous disregard for the parents or the law. In end end this cost Krishna Consciousness millions of dollars in court settlements and huge public relation losses for harboring minors and even kidnapping. For my part I could not understand why Krishna Consciousness had to be so extreme–so all or nothing. But I was young and I could not understand how to balance a spiritual life with the material necessities of life.

Eventually a middle age couple joined the temple. They took to Krishna Consciousness with full enthusiasm, yet they expressed no desire to move in. I was stunned! This was Gerard and Edith, who later were initiated as Gadadhara and Brahmidevi. Gerard was French and Edith was British. Gerard had a job and together they owned a house. This was unheard of within the community of devotees. They were an actual family. I immediately “adopted” them as my parents. I seized upon their presence with fervor. Gerard encouraged me to stay in school and yet make the temple a part of my life. This was music to my ears. He also encouraged other “guest devotees” to stay with their families and take outside jobs. At last I could see a place for myself in Krishna Consciousness. 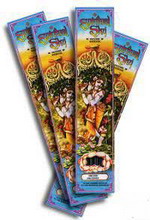 Before Gerard joined the temple, the devotees had developed an incense manufacturing business called Spiritual Sky. Unfortunately, it had mostly failed due to poor financial management. The temple devotees had no business skills. Gerard took it over and nursed it back to life. It soon became the financial back bone of the Toronto temple. As a result Gerard and Edit became important members within the community. They brought middle class values and credibility to the temple.

By taking over Spiritual Sky and making it a success, Gerard showed the devotees how to live a devotional life and at the same time run a successful business. He showed how to balance spiritual life with material life. The influence of Gerard and Edith encouraged a new way of Krishna Consciousness. It became the first step toward the establishment of a lay community of devotees. But this did not come without a cost. A clash of cultures soon arose within the temple community: Krishna Consciousness as a middle class religion or Krishna Consciousness as an ascetic religion. The approach of Gerard and Edith was viewed by many temple devotees as a “watering down” of the philosophy. This was maya. I was torn by this struggle and it hurt me deeply. The asceticism of Krishna Consciousness was both the source of its incredible taste and vibrancy, as well as its ineptitude. Without materialism the bills could not be paid and the devotees ended up in court! A balance was required. Eventually Gerard and Edith were forced to move away from the Toronto temple. There was simply no place for watered down Krishna philosophy within the Toronto temple. They moved to Dallas, Texas and with them went my hope. My need for middle ground soon forced me to leave as well. So in May of 1975 I followed Gerard and Edith to Dallas. It was my summer vacation and my first trip outside of Canada. My life was about to change beyond recognition.