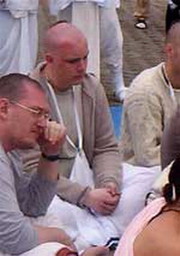 I often meet groups of students in our temple and I am asked how I became a priest. They want to hear if I was ordained. In Hinduism we do not use the word ordination. The dictionary defines ordination as the act of setting apart, the act of appointing, the entering of a holy order or the conferring of sacred orders. In Sanskrit the word that best captures these ideas is diksha which we translate as initiation. So I tell them yes I have been ordained, but in fact I have received diksha.

Hinduism is a loose conglomeration of spiritual groupings called sampradayas and each includes a vast number of gurus and their respective students. The word guru just means teacher and in this context it means religous teacher. To receive diksha means to submit to the teachings of a guru and to receive acceptance as a disciple through the process of initiation, diksha. Diksha is viewed as the mystical process of being accepted by the guru and in turn by God. In fact it is said that the guru accepts the karma of the disciple at the time of initiation and takes personal responsibility for the salvation of the disciple. Long lineage chains of gurus and their disciples have consequently developed within each of these sampradayas. These lineage chains are called paramparas, disciplic successions.

In ISKCON the process by which one received diksha, at least in the early days, meant 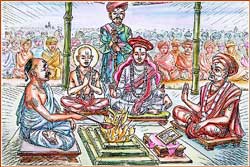 that a devotee would move into a temple and, in the case of a man, shave his head, and gradually learn the theology and lifestyle. After sometime, maybe a year, the student was considered eligible for initiation. Each temple was run by a temple president who could recommend the devotee for diksha. In the early days there was only one guru who would accept the disciple and give the diksha. This was the founder of ISKCON, known as Bhaktivedanta Swami or Prabhupada for short. Prabhupada passed away in 1978. Today there are many gurus, but if one has received diksha from Prabhupada that is considered very special.

In order to receive diksha the devotee had to agree to five basic vows:

1. To refrain from meat eating, including eggs, fish, onions, garlic and mushrooms
2. To refrain from gambling, including lotteries and horse racing, etc.
3. No use of intoxicants including alcohol or even tea and coffee
4. No illicit sex, which even included sex within marriage except for procreation
5. And to chant 16 rounds of the Hare Krishna mantra daily

The chanting of 16 rounds took about 2 hours each day. The process of diksha also had a second part that was given another year or so later. This included the receiving of a special series of mystical mantras that relate to certain subtle aspects of the theology called rasa. We do not need to discuss rasa at this time. It might be useful to know a little about the lifestyle of the devotee in those days. Men were required to keep their heads shaven and to wear the shikha. You know shikha! And both men and women were required to bathe 3 times a day.

A devotee would rise from bed around 3:30 AM, bathe and then attend a prayer service at 4:30 AM called mangala arati. The arati lasted until 5:00 AM at which time the japa period would begin. Japa means chanting, so this was the time set aside to chant the 16 rounds. The japa period usually lasted 1 and half hours. Some temples gave a two full hours for this period. At 7:00 AM or so the daily Bhagavatam class was held, which was a scripture reading and theology class that last for an hour. At 8 AM a communal breakfast was served. After breakfast devotees went to their “job.” In the evening there another program of arati and scripture reading. The evening program was shorter than the morning program and the public was invited to attend.

Anna, as I write this I am wonder struck that I went through this process for years. This was a serious lifestyle and it took great dedication to follow. Gradually I will explain what this did to me, both good and bad, and how I reacted to such discipline. But I think I will add just one more feature about the life style that I think you will find interesting. As I mentioned sex was restricted except for procreation. Well there was one more feature about making babies that I have not mentioned. If a couple wanted to “make that baby” they were both required to chant 50 rounds of japa before having sex. If you recall, I stated that 16 rounds took 2 hours. You do the math!