In the early days of Krishna Consciousness I was known as Bhakta Brian. Shukavak did not 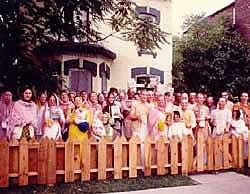 appear for many years. Brian, of course, was my given name and in the temple I became known as “Bhakta” Brian. Bhakta means devotee. The devotees could not understand me. Generally, when someone visited the temple they either liked it so much that they moved in immediately, or they only visited once or twice and were never seen again. There was no middle ground. I liked the temple. In fact, I loved the temple, but I never moved in, and the devotees simply could not comprehend this behavior. There was no congregation in those days; you were either a casual visitor or a full time devotee. I have the dubious distinction of being the first member of Toronto’s Hindu congregation. The real congregation, however. did not develop until years later when Indians started to take an interest. Only non hindus came in those days. 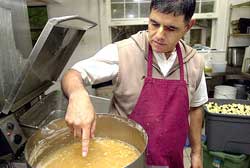 The missionary zeal of the devotees was paramount, and I suffered greatly at their hands. The moment they sensed my seriousness they forever badgered me to leave my family, quit school, shave my head and move in. I was told that my parents were maya and that my school was simply a slaughterhouse for the soul. This kind of aggressive preaching was not done out of meanness, but out of misplaced enthusiasm. After all, they had found Krishna and wanted to share Him with the world.

Most guests visited the temple on a Sunday afternoon for the weekly “love feast.” I always hated that term because it reminded me of the hippie movement that was prominent during those day. I did not like the association of Krishna Consciousness with hippies. After the program I liked to spend my time washing the cooking pots, This made me an easy preaching target because I could be found in front of the sink down in the basement. All “sugared up” with sweet rice, a few gung-ho brahmacaris would inevitably corner me in front of the sink and compel me to hear their testimonials. It was done in a friendly way, but still I felt the pressure. I was in a quandary. I loved the feelings of devotion I received in the temple. I was eager to learn the philosophy and I enjoyed the chanting. I dearly wanted to become a devotee, but I could not tolerate the association of these zealots. They were street people. A lot were draft dodgers running away the America-Vietnam war. Some were hippies, and others where just outright crazy. Quite a few had been in jail or were running away from the law. In general most were societies’ misfits. I was also much younger than most of the them. They were in their early to middle twenties; I was in my late teens. 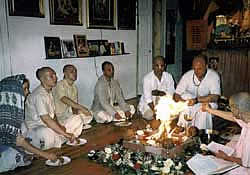 legal fees and court fines, not to mention a ton of negative media attention. The devotees were not evil brainwashers as the media liked to portray them, they were just excited and “fired up” about their newly acquired closeness to God. They wanted to share their feelings with anyone who would listen. But in a few temples, children who were legal minors were encouraged to join without parental consent. Such enthusiastic preaching landed the devotees in court and cost them dearly. All over North America the media had a field-day with the devotees. Today such missionary tactics are not employed. Things have changed a lot.

I recall two occasions when I just could not tolerate this pressure anymore and stopped going to the temple entirely for months on end. But inevitably I would meet the devotees on the street and Bhakta Brian would be convinced to return. It was my destiny. I soon resumed my weekly routine, visiting the temple on Friday evenings and Sunday afternoons. Soon this evolved into weekday evenings and even morning visits, sometimes as early as 5:00 AM. I always carried a dhoti in my book-bag and whenever I arrived I went upstairs to the men’s quarters, took a shower and put on my dhoti and tilaka. (A dhoti is the bottom cloth worn by male devotees and tilaka is the clay markings worn on the forehead.) Anna, to this day my parents have no idea how close they came to losing their first born son to the Hare Krishna movement. I came to within a hair’s breath of shaving up and moving in when I was eighteen. I was saved by Sanskrit.