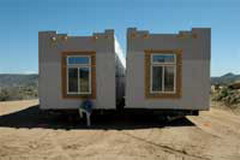 Today was a very special day. Our house arrived in the desert. It came in two sections, the first one arrived at 4 AM and the second one at 7 AM. The first section was supposed to come at 6 AM, so I was not expecting it so early. I just happened to wake up and go outside to take a pee. LOL Way in the distance I could see two yellow lights flashing. This must have been 10 kms away. One light was moving back and forth like it was lost and looking for something and the other light just remained stationary. I watched this for a few minutes when it occurred to me that this may be the pilot car and the tractor for my house. So I ran and got a flash light, jumped up on a picnic table and began flashing the light trying to signal them to move this way. It worked! They started to move in the right direction, but seemed to get lost again so I ran out to the road and began flashing from that direction. Again it worked and I was able to signal them in. In just a few minutes a huge 75 foot tractor and house rolled down the road in front of me. I thought there is no way this house is going to fit on my house pad even in the daylight, what to speak of in the dark! The driver pulled his rig up in front of me stepped out of his 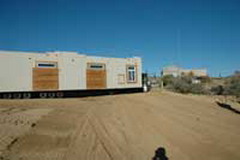 cab walked to where I wanted the house. He told me to stand with the flash light at the back left corner where I wanted the house and then went back and drove his rig to the exact spot where I wanted the house in one up and back motion! I was astounded that he could do this in the dark. What an expert! It did not take this driver more than five minutes to disconnect his tractor from my house and he was off to get the next piece of house. On this day I had to go to Apple Valley, a city over a 100 kms away to bless a new building for a doctor so I was worried that I would not see the second piece of house arrive. As luck would have it the second piece arrived just at 7AM as I was about to leave. This time it was daylight and again this driver drove in like nothing and was able to move the front piece of the house right beside the back piece. A perfect match! My house was in place. 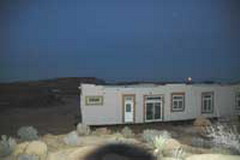 Anna, I have been preparing for this moment for six years. I bought this property with the hope that one day I could see a house here. The land cost was $16,000. I did not know how I would do it, but one way or another, each year I took a small step towards my goal. The first job was to grade a road onto the property. I had a circle drive graded, a road in and a road out. This cost me a thousand dollars. The next job was to arrange for electrical and telephone. The cost was $3500. Then the next year I had a well drilled and I built a well shed. I had to borrow $15,000 for this operation. The next step was to create a house pad so I had a bull dozer grade the land. That happened in two steps, a little one year and a little more the next year. I spent $10,000 on this phase. Then I built my parking shades for $1500. 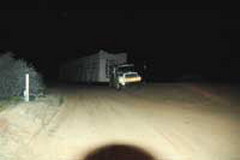 Finally today I was able to have the house placed here. This cost $117,000. It has taken a lot of careful planning and research and money. I would never have thought that a house could be built in a factory a 160 kms away and then just driven to my site. This day I was amazed to see just how easy it was. Now the real work begins. In a day or two the house will be mated together and raised up high in piers. A foundation will be built and then the house will be lowered onto its new permanent foundation. Then stucco will have to be applied to the outside walls, the utilities, water, electricity, gas and internet have to be connected and finally large porches running the entire length of the building on the east and west will be built. Floors and carpeting need to installed inside. Stone counter tops for the kitchen, the bathrooms and the shower must be built. So much is still to be done. But what a feeling of success and satisfaction to see this house arrive on this day!