There is a common hymn sung in many Hindu temple that goes as follows: guru brahma guru vishnu, guru devo maheshvara, guru sakshat param brahma, tasmai shri guruve namaha. Most people have no understanding of these words, but in essence they praise guru as being on par with God. Strictly speaking the word guru simply means “heavy”; a guru is a person “heavy” in knowledge. In other words, a guru is a teacher, plain and simple. Unfortunately, modern Hinduism has made guru into something much different than a teacher. I call this modern guru the capital “G” guru. By equating guru with God the knowledge giving aspect of guru–the guru as teacher–has been replaced by the Guru as a divine being. Unfortunately, people want a Guru, who is possessed of divine power, instead of the one who is possessed of knowledge. No longer does the guru have to teach and no longer does the student have to learn. Just with the raise of the hand, with a simple smile, or by the touch of the feet, the Guru delivers blessings. But blessings of what? Certainly not knowledge. People now accept the facade of the guru instead of the substance of the guru, the shadow instead of the reality. Such a change in the role of the guru has become one of the most destructive forces within Hinduism today. It is the debasement of the tradition.

Dallas was a watershed period in my life. Not only was it a time of marriage; it was a time of Guru. From those days, my life was permanently changed. I received my initiation from A. C. Bhaktivedanta Swami Prabhupada on June 18, 1975 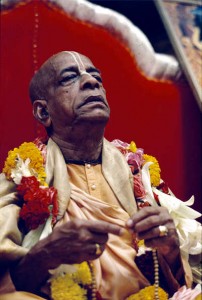 while I was visiting the Dallas temple. In those days most initiation ceremonies where conducted through the mail. The local temple president would recommend the disciple in a letter and then in a reply Prabhupada would accept the candidate by sending a spiritual name. A ceremony was then preformed by the local temple president or some other senior devotee. It was during this ceremony that the new spiritual name was formally given. But my initiation was different. Prabhupada was personally present, which made the occasion very special. As I write these lines I vividly remember how exciting that day was to actually see Prabhupada. This was indeed a rare occasion! Devotees came from all over North America to see Prabhupada in the Dallas temple for this ceremony. All the men freshly shaved their heads and put on new robes. The ladies put on their most colorful saris. It was a most festive time.

Anna, it is difficult to describe how exciting it was to see Prabhupada as he arrived in the Dallas temple on the day of initiation! I had seen him years before in West Virginia at New Vrindavan, but only from a distance. Now here I was about to meet Prabhupada personally. With all the celebrity I expected to meet a very big man, instead I was stunned to see 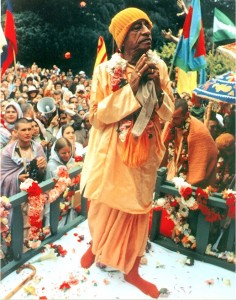 how tiny Prabhupada actually was. He wore saffron robes and sat in a raised throne that completely enveloped him, yet Prabhupada had power! When he sang you cried! When he spoke, his words pierced your heart. His glance looked directly into your soul. You could have no secrets in the presence of Prabhupada. Indeed, if ever anyone had divine Guru power, Prabhupada was that one. And as he sat on this huge raised seat he explained how the guru is to be treated with the same respect as God because he is the representative of God. In those day I was completely satisfied with this explaination, but now having seen the logical extension of such a practice I am no longer satisfied. In those days, however, I needed a capital “G” guru who would tell me what to do and so that is exactly what I got. As I recall there were fifty initiates who came from all over the southern United States for this ceremony, plus hundreds of other devotees who had come just to have a rare sight of their Guru, Prabhupada. All the men who were to receive initiation appeared with shaven heads. All except one that is, me. I was going back to university and so I did not want to shave my head. In later years, however, I used to keep my head shaven, but on this occasion I had special permission from the temple president, Jagadish whom I had known in Toronto, to not have a shaven head. Had it not been for Jagadisha I would have left the movement years before. He always created the space for me that I needed. Jagadisha was my benefactor and I have great respect for him today even though he has left. I remember walking down the aisle toward Prabhupada in the presence of all the devotees. I bowed before him and when I got up he asked me to recite the four regulative principles. I did and then he handed me a string of chanting beads and said, “Chant sixteen rounds of maha-mantra everyday. Your name is Shukavak Dasa.” From that moment I became a disciple and the person called Shukavak was born.

The power and charisma of Prabhupada was awesome. Prabhupada had come to America in 1966 at the request of his Guru who had asked him to “Go to the western countries and teach the message of Krishna Consciousness.” So at the grand age of 70 Prabhupada boarded a freighter ship 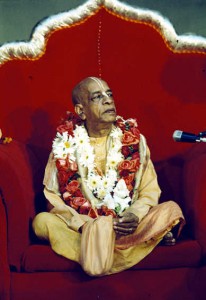 bound for New York from Calcutta. He had virtually no money and during the long ocean voyage he suffered two heart attacks! Somehow he managed to survive and eventually arrived at Elis Island in New York where millions of immigrants had previously arrived. The story of Prabhupada in America is an inspiring story of courage and determination. Prabhupada indeed was a remarkable person. In essence the mission of Prabhupada started in a most humble way. He established his first temple in a small storefront in the streets of New York and daily he chanted alone in the parks and streets of New York. One by one the youth of America began to come and hear his message. As more people came he initiated them and asked them to go to other cities and open a temple and begin chanting in the streets. In this way I first came to know of Krishna Consciousness when the devotees came to Toronto and opened a temple, city by city, temple by temple, a world wide movement gradually developed.

All images taken from: http://www.prabhupada.de/sppic/sp_fotos.htm