I surely have one of the most unique positions on the face of this planet. I have both an academic as well as a practical understanding of Hindu culture. My Sanskrit training has given me “ownership” in the Sanskrit language, and therefore an insight into Hindu culture from the perspective of its ancient writings. My position as a priest has allowed me entrance into the most intimate areas of modern Hinduism: the lives of its people, their marriages and funerals, their worship, and even relations between husband and wife. As much as any westerner can, I see with Hindu eyes; I know the Hindu mind.

Here is an incident that illustrates a difference between the western and the Hindu way of seeing the world. I am often asked to perform a wedding where either the bride or the groom is non Hindu, which means that many westerners will attend the wedding. If the time for the wedding has been set for 2:00 PM, for example, the western guests will arrive a little early so that they are ready for the wedding to start promptly. Invariably the wedding will not start until sometime after 2:30 and the majority of the Hindu guests will not arrive until sometime around 2:45 or 3:00 PM. This causes a lot of bewilderment on both sides. I have even seen Hindu families compensate for this difference by issuing two sets of invitations, one that says 2:00 PM for the Western guests and the other that says 1:00 PM for the Hindu guests! There is something about western culture that is formal, linear and direct, whereas Hindu culture is casual, fluid and indirect. If the wedding time is stated to be at 2 PM, it means the wedding will start at 2 PM and every westerner knows that they should be present at 2:00 PM if not a few minutes earlier. Time is precise. In Hindu culture just the opposite is true. 2 PM means sometime after 2, perhaps 2:30 or later. Time is fluid. I suspect that classification of thinking lays at the root of all these differences. 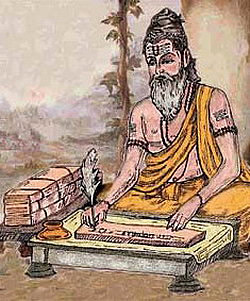 Here is another illustration. There are scenes from Valmiki’s Ramayana that describe how the forest sages would practice their austerities of fasting, celibacy, silence and so on. However, I was astounded to find that occasionally one sage would acquire a goat and arrange for a get-together wherein all the sages would come for a night of meat, wine and song. Afterwards, they will melt back into the forest and resume their austerities. To my western mind this seemed contradictory. How could they break their vows so blatantly? They were supposed to be great sages! These days, however, I understand that an occasional night of “goat” was an important relief valve that allowed them to continue with their austerities over the long run. They had compartmentalized their activities. There was no contradiction. I sometimes think that when Prabhupada came to the west and asked his disciples to chant 16 rounds and follow the four regulative principles, he meant it in the “Hindu” way, whereas his western disciples took it in the “western” way. 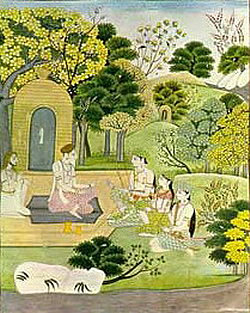 In other words, the two groups take completely different approaches to following a vow. This is similar to the way westerners and Indian Hindus perceive time. The western interpretation is linear, direct and literal; the Hindu interpretation is fluid, casual and indirect. Unfortunately, most westerners end up giving up completely because they take everything so literally and so “burn out.” Without a relief valve and the means to compartmentalize contradictory behavior they cannot last. Perhaps it would have been better to ask them to vow to follow things that could be done permanently, instead of having them vow to do something impossible to follow. Perhaps more devotees would have remained had there been less extreme rules or some means of pressure relief. Better to have followed the way of the Ramayana sages and to have lasted, than to have tried so hard only to burn out and leave. A “goat” party may be a good thing. Unfortunately, I have no evidence that Prabhupada really meant that we were to understand the four regulative principles in the “Hindu way.” As far as “goat parties” are concerned I also know that without considerable training and maturity it would have been impossible for many western devotees to accept the “Hindu way” without going to excess. At the same time I do think the severity of the rules that Prabhupada asked his disciples to follow has led to a great loss for the movement. Great things were done in the beginning, but only a few could keep it up. On the other hand, the movement derived its power from this “western” style adherence to the rules.