“The more a man finds his sources of pleasure in himself, the happier he will be.”*

There is a famous Hindu book called the Vedanta Sutra. This a great philosophical and theological treatise that discusses the nature of reality. One topic is happiness. What is the nature of happiness in this world? There, an aphorism reads: anandamayo ‘bhyasat. which means that the nature of God is happiness. The Vedanta Sutra also teaches that the individual soul is a tiny “particle” of God and therefore has the same nature as God. Since God seeks happiness, so the soul seeks happiness. To state the matter in colloquial terms we are pleasure seeking animals. Our desire to find happiness lies at the core of our existence. All of life revolves around this point. Art, drama, food, economics, travel, sex, you name it, everything is about seeking happiness. And we have this nature because God has it.

A distraught lady who was having trouble in her relationships recently wrote a note expressing her opinion that men are pigs. So she asked me, “Why”? The answer is simple: since human beings are pleasure seeking beings some seek happiness in high places and others seek it in low places. The ones that seek it in low places are called “pigs.” In Sanskrit there are many words for happiness. The most common are sukha and ananda, but there is a world of difference between the two. Sukha is the happiness that is found in this world. Generally such happiness is achieved through contact with the senses and their objects. The ear, for example, hears a sound. That sound enters the ear canal and is ultimately translated into a sensation that the brain interprets as favorable, unfavorable or mixed. A favorable sensation leads to a pleasurable experience that we call happiness. The same applies to smells that enter the nose, light forms that enter the eye, sensations that touch the tongue or textures that touch the skin. Sense contact forms the basis of happiness. This is sukha. The problem with sukha is that it is temporary. The favorable sensations of sound, taste, sight, smell and touch come to an end. But the soul demands “an ocean” of happiness, yet the physical world can only supply a relative “drop” of happiness.

The living beings in this world seek sukha in difference ways. The ones that do it in high ways, so called cultured ways, we call connoisseurs; the ones that do it in less cultured ways we call “pigs.” But in all cases beings seek happiness. I have told you that this physical world is made of matter that is arranged in three modes or phases, goodness, passion and darkness. Happiness, the sukha of this world. is also classified according to these three modes.

Happiness according to goodness is light, subtle, and long lasting, happiness that comes from passion is intense but short lived, happiness that comes from darkness leads to addiction and suffering. Sometimes sukha is simply described as the absence of suffering, not a thing in its own right. My father used to tell the story of the man who constantly banged his head on the wall. When asked why he did this, he answered, “Because it feels good when I stop.” So in one sense sukha, the happiness of this world, is just the absence of suffering.

In contrast there is ananda. Sometime we translate this word as bliss, but what is meant is a positive of state of permeant happiness. Call this spiritual happiness if you will. Ananda is the “ocean” of happiness that that we all seek. If we can not find ananda, however, we settle for sukha, a mere drop of real happiness. One way or another our pleasure seeking nature drives us to seek happiness. Much of religion directs the soul to avoid sukha and to seek ananda instead. This is why sex is often shunned by many religions. It is the highest form of sukha in this world. It seems that it is not possible to have ananda and at the same time seek sukha. Such is the nature of happiness in this world according to Hinduism.

“The happiness that a person enjoys after long practice and that leads to the cessation of suffering–that in the beginning is like poison, but in the end is like nectar–is of the nature of goodness. It arises from the serenity that comes from perception of the soul.”

“The happiness that arises from contact of the senses and their objects–that in the beginning is like nectar, but in the end is like poison–is regarded as happiness characterized by passion.”

“The happiness that is self-deluding in the beginning as well as in the end–that arises from sleep, idleness, and intoxication–is declared to be of the nature of darkness.”

This is what the Gita has to say about the happiness of this world. I have told you about sukha and ananda, but there is another word for happiness, kama. Kama is generally regarded sensual happiness, hence the title of the Kama-sutra, the Hindu book on love. It 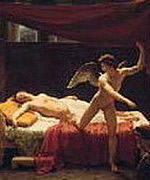 is interesting that in the Gita, Krishna declares that he is kama. In other words, God is sensual love. Medieaval India and even modern India are extremely puritanical. This is due to Muslim and British influence. Topics such as sex are taboo.

Ancient India, on the other hand, had a completely different attitude towards love and sex. Sex was celebrated as one of the foundations of life. It was a positive experience. Sexual scenes were even carved into the towers of the temples. This is inconceivable nowadays. By depicting the gods making love all the world becomes happy. In my academic studies ancient India was the focus of my studies. My attitudes towards love and happiness have returned to this level of Indian culture. For a time my involvement with ISKCON was an immersion in mediaeval and modern Hindu culture which are completely against love and happiness in this world. But these ideas are fast evaporating from my life. They just lead to frustration.