I was recently reading Homer’s Iliad trying to pick up a better sense of ancient Greek culture and religion. My trip to Rome last year has encouraged me to have another look at the ancient Romans and Greeks. The grandeur of ancient Rome was overwhelming. Both the Romans and the Greeks remind me of ancient Indian. Of course, the Romans, Greeks and ancient Indians are just different branches of the same tribe of Aryans so it is not surprising that they have similar religions. What I most like about the Iliad is its life affirming religious perspective, and I think Wolfgang Peterson’s movie Troy has nicely captured this aspect of Greek culture. Of course, today, ancient Rome and Troy are long eclipsed and ancient Indian culture has moved into a completely different phase, but these three traditions in their earliest stages were life affirming cultures. By this I mean they had views of the world that were accepting of the world. They embraced the world as it is, with

all its pleasure and pain.

In Peterson’s movie I liked Hector’s admonition to the Trojans, “Love the gods, love your women and love your country.” And then later Achilles tells his lover how the gods envy human beings. “Humans are mortal; they only live once and so every moment is special.” These are life affirming statements. Similarly, in the Bhagavad Gita the ancient Vedic sacrifice is called an ishtha-kama-dhuk, a “wish yielding cow of desire.” The sacrifice is described as the means to attain the bounty of the world. This is a statement that reveals a life affirming view of the world from much earlier Vedic time. It is not representative of the Gita as a whole, which represent a later phase of Vedic religion. The erotic stone images that adorn the ancient Hindu temples in the south of India are also life affirming testaments. So it is clear that the ancient Romans, Greeks and the ancient Indians had life affirming religious views.

Eventually the Greek religion and its Roman cousin gave way to the world denying asceticism of Christianity. Later phases of Hinduism, under the influence of the devotional bhakti traditions also evolved many world denying ascetic strains. In other developments, Hinduism spawned Jainism and Buddhism, which were, in their original forms, anti world ascetic religions. The four noble truths of Buddhism are completely anti world statements about the nature of reality, “The world is temporary; all is suffering,” is the first of these noble truths.

Religions that emphasize asceticism, fasting, vegetarianism, that view the world as illusory (maya), are life denying religions. This includes Jainism, Buddhism, much of Islam, modern 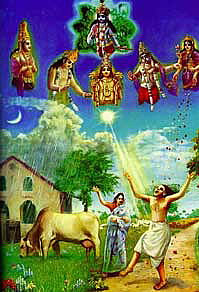 Certainly my years associated with Krishna Consciousness was an immersion in one of the life denying ascetic strains of Hinduism. In those days we were taught that the world was maya and that attachment for the things of this world was an evil. “Don’t see the beauty of the sunset, it is maya.” Or if you do see the beauty of the sunset, see it as God’s smiling face.” We were not allowed to see the sun for the real beauty that it is. Anna, it is a blessing of the nature that all things eventually even out. Water seeks its own level. So in recent years, I have shifted my personal religious views away from the life denying traditions and toward the life affirming traditions. To reach the middle I had to go to the edge.