Growing up in Canada I was the shyest, most mild, nondescript child imaginable. But destiny has a way of unfolding in ways that no one can foresee. Who could imagine that I would grow up to be a religious leader and a public figure? As a child I did not appear to have any leadership qualities. I would always fall into the background and let others take the lead. I was happy to follow. As the years went by, however, I began to show a

competency in practical things. I had common sense and so I could get things done when others could not. Gradually, I came to be seen as a silent force, the kid who could be counted on to make good decisions. I was shocked to find that people would follow when I took the lead. I found myself in charge at sporting events, school projects and amongst friends. I even became the captain of a hockey team. However, whenever there was someone else who wanted to lead I would happily let that person take charge. I still do this today. I have to be forced to stand up in public, and even though I appear to be extremely competent, I dislike being in public. I still have my shy and reclusive nature.

Anna, I have never had many friends and I have never belonged to a large social group. In general I am a silent person. The friendships that I do keep are always very close and intense. My first friend was Gordie Caswell. This relationship lasted between the years of 5 and 12 years and it would have continued had Gordie not moved away with his family. Then there was Paul Hoffman. Paul and I were extremely close between the ages of 12 and 18. This relationship unfortunately ended when I joined the Hare Krishna movement. Later Paul went to a scuba diving school in Florida. He wanted to work on oil rigs. Today I have no idea where either of these friends are. My closest friendship today is with Haridham, whom I have known for the past 23 years. Haridham and I met in New Vrindavan, a Hare Krishna farm community in West Virginia. This was always been the way with me, one long term and close relationship at a time with just a few associates in the distance.

Here are two examples of my “quiet control” nature at work. In 1982 I arrived in New Vrindavan. It is an interesting story how I came to be there, but I will save that for later. New Vrindavan is a rural community run by the Hare Krishna Movement in the hill country of West Virginia. About 800 devotees lived at this place at the time. When I arrived, Bhaktipada, the spiritual leader of the community of whom I will have a lot to say later, immediately 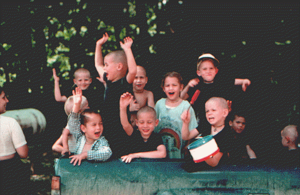 Children at a New Vrindavan school

asked me to take charge of the community’s schools, called gurukulas. (Gurukulaliterally means “the house of the guru.”) At the time there was a nursery school with about a 100 children, an elementary school with 150 students and a secondary school for the older students ages 14 to 18. There was only about 50 students in this group. In total I had responsibility for 300 students and a staff of 50. All children above the age of 5 lived at the school away from their parents. It was a boarding school, so not only was I in charge of the academic side of things, I also had responsibility for the boarding side of the school. This was a huge responsibility, and looking back at this now I shutter at the awesome responsibility I assumed. Even though Bhaktipad, the community’s spiritual head retained final control of everything in the school, I had responsibility for the safety and welfare of 350 human beings with only meager resources. For all intents and purposes New Vrindavan was a backward third world country and a communist state. I will speak of New Vrindavan in detail later.

You cannot imagine a more difficult place to raise and educate children. When I arrived, New Vrindavan’s school system was a disaster. The conditions were unsanitary. In addition to all the usual childhood diseases I had to deal with staph infections, hepatitis, dysentery and even typhoid! And this was America? There were no classrooms, no text books, no trained teachers, and the children had to sleep directly on the floor in cold rooms. Medical care was totally marginal. The situation was third rate and dangerous. On the positive side, there was a core of dedicated, but untrained teachers who were willing to do anything to make the situation better. Both Haridham and Sukulina were part of this core group and my heart goes out to this group of pioneers for their dedication. Without their help I could not have improved the school to the extent that I did. Anna, this will sound like I am blowing my own horn, but by the time I left New Vrindanan, six years later, all divisions of the school had brand new classrooms, dormitories, text books and even a school secretary. There was a training program for the teachers, which included academic, psychological, medical. and nutritional training. I was even able to arrange for the school to receive State accreditation and funding. This school had struggled for a decade before I arrived and it was just waiting for someone with skill and determination to pull it from the bring of disaster. I was that person and I had to use every ounce of my administrative muscle. This is an example of my controlling nature unleashed.

Here is another example. In 1988 I arrived in Fullerton, California, to take over the development of a small Hindu community. If New Vrindavan was a third world communist state, Fullerton was a first world capitalist state! I found myself in a completely different world. There had been a man named Haripada (not Haridhama) who had started this small temple. Haripad had struggled for ten years to build up a congregation of mostly of Indian members, but he could not get it to grow beyond a certain point. He was frustrated and wanted to move away, but before he just packed his bags and left in the middle of the night he called me to see if I would be willing to take over. After some thought I agreed, and so Sukulina and I moved our family of six children into a tiny three bedroom rented house on a very very busy and loud street. I decided that I would give this a try for one year and if I could not get this congregation to grow and buy a property I would leave. I had never before worked with an Indian congregation. I knew nothing of their culture, but I was willing to learn. I will write of these experiences later, but for now, let me say that within nine months this congregation exploded in size and bought their own property. It seemed to happen over night. All that was needed was some good determined management. The group was waiting to take off and so I became the catalyst to facilitate the growth. Moving this community from the brink of collapse almost killed me and it took more than every ounce of my controlling nature to accomplish, but I was successful. I am proud to say that this temple still exists today. I am no longer the priest, but this temple community has blossomed into a vibrant community.

What I have done over the years is to take my hidden administrative talents and channel them a positive way. But believe me, the way I manage now is much different than the way I did in earlier years. In the beginning I got my way in an autocratic manner. I was never a bully or anything like that, but compared to the way I am now, I was crude. Through a lot of experience, mistakes and education–believe me, I have been to the school of hard knocks–I have learned to adopt a cooperative management approach. I now delegate as much as I can and I give authority to those I delegate to. This is my style of quiet management.