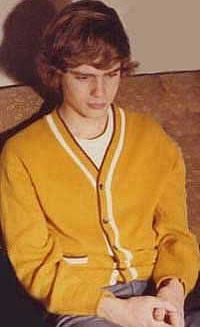 Years ago, as a teenager, when I started to attend the Hare Krishna temple in Toronto I never told my friends or my parents. I was embarrassed to let them know that I was attending a Hindu temple in downtown Toronto. I kept it a secret for years. When I received the initiated name, Shukavak, I was so afraid that my friends and parents would object so I used the name only amongst devotees. I did not want anyone to know that I had this other identity. Then after I married I had my first son, Vrindavan, within just 10 months. It was too soon, so I was embarrassed. Then after two children I used to hide the fact that I had three children, then four children, then five and six, and so on. I was psychologically unprepared to have more than two children so I would down play the fact that I that I had such a large family. Anna, do you know that I have never had a job in my life? I have always worked for myself, but how can you survive without a job with such a large family? Again I used to be so embarrassed by this. From the time I started attending the Hare Krishna temple in Toronto there was been nothing “normal” about my life. I have suffered so much because I did not live according to my own expectations and by this I mean the norms of white Anglo-Saxon Canadian culture. For years I suffered with two identities, Brian Marvin and this strange and exotic Shukavak and gradually the Brian Marvin was becoming pounded and pounded down into the ground. He simply could not maintain. So I eventually came to the point of severe identity crisis. The situation was becoming dangerous. How could I resolve this? In the end the writing of my Ph.D. dissertation was the way that I ultimately resolved my identity crisis. I woke up one day and found that I had resolved the crisis. I was still alive and I had survived. In fact I have not just survived, I have prospered and I am continuing to prosper! Sadly, I have many colleagues who have not survived so well, some have even ended their lives.

So now I am able to tell all of my American friends in the desert or anywhere (and desert people are very conservative!) that I am Shukavak, I have nine children, I am a Hindu priest, I am also Brian Marvin the WASP from Canadian. Please call me Shuka. And I do it will complete and utter confidence without a hint of  embarrassment or hesitation. And what is the result? I am accepted fully. I go to a coffee shop and order a special drink and the girl asks me what name to put on the cup and I say Shuka, S-H-U-K-A and she says, “Wow, that is an unusual name.” And I explain, it is a Hindu name. “Oh, neat”! she says. I am accepted. I can site hundreds of examples. I primarily use the name Shukavak and only 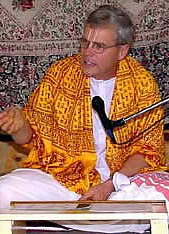 occasionally do I use Brian Marvin. I do this mostly regarding legal issues. There is only one identity now. Shukavak and Brian Marvin are one. How this is came about is actually an important and complex subject and something that lays at the core of my being. I will address this subject at length at another point, but for now I want to make the point that how I accept myself determines how other people accept me. So I have learned to be absolutely honest, outright and confident in myself. Occasional I will even tell people that I do not come to social events because I feel  awkward. I save myself having to attend many events this way.

All my children have “unusual” Sanskrit names, Shesha, Vrindavan, Keshava, etc. and yet they all use these names with complete confidence and nobody questions. And if they are asked they tell people how they got their names and that they are proud of their names. They are accepted in their worlds. All the time I see Indians changing their names in order to fit into American society. Krishna becomes Chris, Praful becomes Paul, Samdeep becomes Sam, and so on. This is the wrong approach. Be Krishna, be Praful, be Samdeep and be proud! And if you ARE proud and convinced you will be accepted. In other words, I have learned that how people perceive you is dependent on how you perceive yourself. If you are weak and lack confidence they will pickup on this and treat you accordingly. But if you are bold, honest and confident they will accept you on your terms. It is that simple.