Living at the cottage in the log house was no easy matter, especially for Kama Nagari, who was a southern girl and had never seen snow, what to speak of temperatures below 0 degrees Celsius. A Canadian winter can see the temperature drop to minus 40 degrees celsius! Kama Nagari had no concept of these kinds of temperatures. Nor had she seen black flies or the dreaded Canadian mosquito.

I give Kama Nagari credit for trying to make a life in the Canadian Northland. She entered 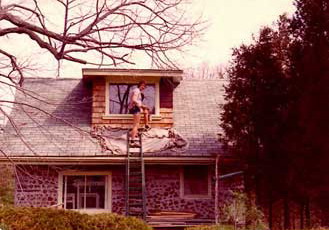 life with me entertained by  romantic notions of living with a nice Canadian boy, a lumber jack, and having a life in the great Canadian north. Another Walden myth. These romantic dreams, however, were quickly dispelled. Every time she wanted a shower she had to heat water on a wood fire then stand outside at 35 degrees below zero in January and pour buckets of steaming water on her head and try to get clean before the water froze to her skin, or every time she wanted to use the toilet you had to walk 50 meters through the snow and sit on a frozen toilet seat. In the end she was unable to make this adjustment and I think this was part of the reason for our eventual breakup. A Floridian urban girl is just too far removed from the rural life in northern Canada. Ultimately the life that I was offering her has beyond what she could tolerate. The first time we lived in Canada was easy. We came to downtown Toronto, secured an apartment, got a job and went to school. We successfully completed our academic year and returned to the United States, home. We even found time to make a baby. During this adventure to the North everything was more difficult, the cold, the snow, ice, insects, mud. We really did live at Walden pond this time. Like I have said, the simple life is not so simple. We would have done better had we repeated our previous adventure, living in the city, instead of trying to pursue our Walden dream. 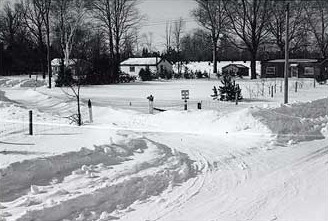 Making money was also a problem. We had gone into the ski hat knitting business, but knitting turned out to demand huge skills and fortitude. The routine went something like this. Once a week I would drive into Toronto pick up knitting supplies and deliver completed hats. My little car was constantly filled with woolen ski hats and skeins of yarn and knitting needles. At the same time, while I was in Toronto, I would attend university. Usually this would involve an overnight stay so I would stay at my parent’s home. As I write this I marvel at the fact that this routine is similar to what I do now between Riverside and the desert, except that I have my own apartment in Riverside instead of my parent’s home. The distance from the cottage to Toronto was about 180 kms whereas the distance from the desert to Riverside is only 100 kms. When I chose my desert property I purposely kept the distance at 100 kms. In Toronto I learned that 180 Kms was too far to be a comfortable commuting distance. When we first lived in Toronto money was not a major concern. This time the need for money was all consuming and school became pushed into the background.

We made one dollar for each hat that we sewed and Kama Nagari could make six hats per hour if everything went right, but of course, it never did. The machine constantly jammed, the yarn had knots and the pattern card forever seemed to miss the design and break. So we spent as much time “un-knitting” as knitting. Plus pulling the knitter down the rails and over the needles, up and down, back and forth, was back-breaking work. Kama Nagari could only work for a few hours a day with breaks in between. If we made 30 hats a day we considered it a good day. Many days saw half that number. Then when you consider my travel time, gas and wear and tear on my car we barely made anything. I would drive to Toronto on a Monday and return on Thursday which meant that Kama Nagari spent a lot of time alone. Vrindavan was a year old and as you recall Kama Nagari was pregnant with Shesha for the first 5 months. After that she had two babies to care for. It was a hard life.

We arrived at the cottage in mid May which was the start of the black fly season. I have 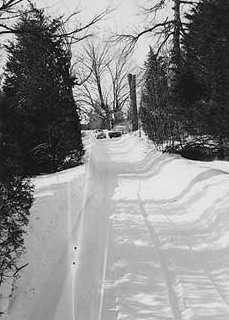 already described the effects of black flies during my sojourn to Sultan. Poor Vrindavan used to bleed so much. He was fresh meat for these flies. Any time he was outside Kama Nagari had to keep him under a net. Then the mosquitoes came in June. Canadian mosquitoes are huge and loud. I get nightmares even today hearing their droning sound. Again we had to use mosquito nets. With just the insects alone it was hard to enjoy our Walden! By late August the insects abated and more or less we were able to enjoy September and October. Then winter moved in. The first snows always came by mid november and the severe cold weather always hit by the first of December. I remember all the roads freezing over and snows falling so we had two feet of snow on the ground by the end of November and sometimes drifts as high as 2 meters. Many times I was unable to get home and had to stay an extra night in the city leaving Kama Nagari, Vrindavan and Shesha alone, and snowed in. In those days we only had one car and all supplies had to be brought in from the local town of Campbellford, 25 kms away. This meant that when I was away Kama Nagari was isolated. During the winters the roads could be treacherous. I have driven through so much fog, rain, freezing rain, sleet, snow and blizzards. It is a wonder that I survived and in those days my little VW bug barely had heat. I have seen snow on the ground until the middle of April. Even though at the time we viewed our life as an adventure, and this is a view that I still maintain, it was actually a difficult existence and between the driving, the getting of supplies, the constant driving into town, the chopping of wood, and the hauling of water, I had little time for study.

Anna, I have a major blessing in my life. I am able to focus so deeply on what I am doing that I can enter a state of total absorption, a kind of samadhi. This brings great joy! As a student I was able to experience this joy in the form of scholarship. There have been times when I have been able to enter this state of prolonged meditation and total absorption on my studies that lasts for weeks. Indescribable joy arises from such contemplation and even though I was fully awake performing all duties, eating and sleeping, traveling and all my other daily activities, I was totally focused on my research. There is great joy in such a mental state, but at the same time there comes terrible suffering when you are unable enter this state. This was my plight while living at my Walden. The need to make money, the driving and the shear bodily maintenance of living the rural life, robbed me of my mental focus. I was forever distracted and could never enter that deep state of focus. And for one who had tasted that joy, being cutoff was hellish. It was during this period of my life that my seemingly endless struggle to make a living and to study and write, began. It is a struggle that goes on even today. I am forever searching for that state of absorption and the joy it brings.