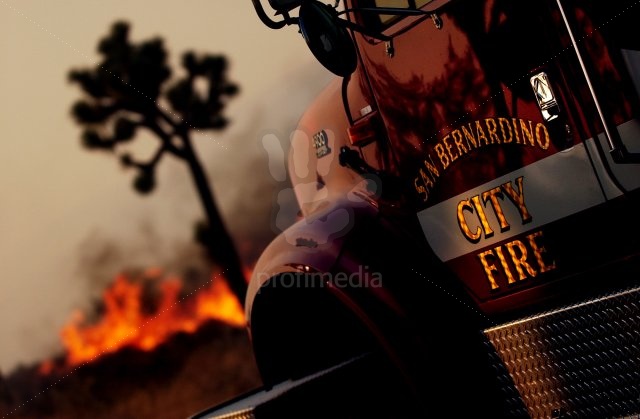 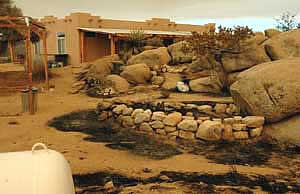 View of the burn from the west

My desert paradise has turned into hell. Today my neighbor Mr. Wright, called me in a panic saying, “Call your wife; get her out; fire is coming. I immediately called but I could not reach her. I asked Mr. Wright to go and bang on the door. At first Sukulina did not believe what he was saying, but in a few moments she saw a wall of fire coming in the distance. Anna, you can not imagine what a wind driven desert brush fire looks like. It can travel so fast, as much as 50 kms per hour and it can be a wall of flame 10 meters high. This is because many of the desert plants hold creosote and other extremely flammable oils in their leaves and bark to give them protection from drought and predators. So when they burn they burn hot and fast! Sukulina grabbed Radhika, loaded the horses, dogs, cats and other animals into the truck and trailer and drove as fast as she could. Later she told me that she got out just ten minutes ahead of the fire. As soon as she was clear and had made it to a place where she could call me, she was out of breath and told me that our house would burn for sure. She saw neighbors homes already on fire.

Anna, you can not imagine a more depressing feeling, hearing that your home would soon burn. Life in the desert is different than life in the city. In the desert many people develop their own property and build their own homes. The attachment to the land for rural people is much greater than for most city dwellers. My heart sank. All that I had worked for was about to be destroyed. I was standing in a Riverside mall when I heard this and I cried in my heart. Sure we had fire insurance, but there is no way that I had the physical or mental strength to rebuild what was about to be lost.

An hour later Sukulina called and said that our house had not burned. The cement stucco siding and other things that we had done saved us. Our neighbor, Bruce from behind us, could not escape in time and had been trapped by the fire. Somehow he survived. The good thing about a desert brush fire is that it moves quickly so if you can protect yourself from the smoke you can survive. He told us that the fire came right up to our house and passed by. No damage; we were saved.

What a relief looking from our home. Anna, California is the land of nature attacks. What can I say? In the 18 years that I have been here I have seen incredible floods and landslides, earthquakes that have collapsed whole freeways, winds that have snapped electrical poles as if they were twigs and fires on such a scale that it is hard to imagine. Of all these disasters this fire has affected me the most. All during this disaster I have felt so depressed and even though my home had not been destroyed it is the most frustrating thing to see that everybody else hardly knows about the fire and how I was affected. At first the media reports on the fire were meager and yet my life had been so dramatically affected. Then last night I listened to the reports and watched the video on the news. They gave a full account and showed the disaster in great detail. I saw huge walls of flames and people telling how terrible it was. They showed both ground shots and air footage of the fire. This felt so good. Now my story was out to the world and I felt validated. Anna, I now know how important it is for the families of the soldiers in Iraq to know that the world feels their pain. I understand how important it is for the families and returning soldiers to see the welcome home signs. I grieve for the Vietnam soldiers who had to return to a country that neglected them and could not appreciate their sacrifice. For the first time I know their frustrations.

At a time of disaster communications are all important. This is one thing that I have learned. I have not seen Sukulina for days and without the cell phone I would have no idea of where she is or what her condition is. I still do not know where most of my neighbors are, but Bruce, the one who inadvertently stayed behind has turned out to be a Godsend. Had he not been there to tell us that our house had been spared, the pain would have been far worst. For sure I am going to set up my old ham radio equipment and get an emergency generator. When you live in the desert you must be self reliant. This I already knew, but now I feel it.

Today I have seen our property and it is as if the hand of death had passed over the land. No major damage to us, but many of our neighbors have lost animals and property. The sky is still darkened by the clouds of smoke and the light is amber. The feeling is eery. It is a land between life and death. Tonight Sukulina, the girls and the animals are returning and even though we have had no real damage we all feel that we have been violated. Time heals all wounds. I will not return for another three days, but when I get there I am sure they will have put much of life back together and removed the stain until the next disaster visits.