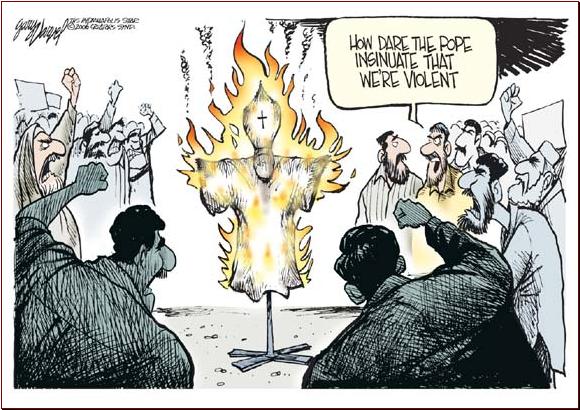 The Pope Under Attack

“An al Qaeda-linked extremist group warned Pope Benedict XVI on Monday that he and the West were “doomed,” as protesters raged across the Muslim world to demand more of an apology from the pontiff for his remarks about Islam and violence. The Mujahedeen Shura Council, an umbrella organization of Sunni Arab extremist groups that includes al Qaeda in Iraq, issued a statement on a Web forum vowing to continue its holy war against the West. The group said Muslims would be victorious and addressed the pope as “the worshipper of the cross” saying “you and the West are doomed as you can see from the defeat in Iraq, Afghanistan, Chechnya and elsewhere. … We will break up the cross, spill the liquor and impose head tax, then the only thing acceptable is a conversion (to Islam) or to be (killed by) the sword.”

A huge controversy is now brewing throughout the Muslim world over a statement made by Pope Benedict XVI. As you can see from the above news statement clipped from CNN, Muslim’s are asking for an apology and even for the death of the pope. As usual the rage has also expanded to a call for the death of the great satan (the United States). A few months ago a similar outrage occurred after a Danish Newspaper published a series of cartoons depicting Muhammad in a satirical way. Danish embassies throughout the Muslim world were attacked and burned. This time churches are being burned and riots are occurring in many places.

At the time, I looked at the cartoons and, yes, I could see a problem, but it was no worse than how Muslims have ridiculed Judaism in their press innumerable times. Why is it that Islam can ridicule other religions and yet cannot tolerate criticism against itself? Tonight I read the text of the pope’s statement and frankly, the level of his lecture is so far beyond what the average person is capable of understanding makes the matter laughable. One statement from the entire lecture has been picked up and taken out of context. His lecture was a theological discussion given at a university on the relationship between God and human violence in the name of religion. Of course, he made references to Islam and jihad, the world is full of terrorism and suicide bombings in the name of Islam, but he could have just as easily made reference to Hinduism and the Bhagavad-gita. There God speaks on a battlefield and tells a warrior to go to battle. Would this cause a 100 million Hindus to riot and burn churches if the pope mentioned this in a critical way? Not at all. The reaction of Islam is way out of proportion to the “crime.” When will the voices of moderation and tolerance be heard?

I have read the Qur’an. I have read the Bible. There is much in common between the Old Testament and the Qur’an. Both have strong elements of militarism, but of course, how you wish to interpret either text depends on what you wish to achieve, divine peace or holy war. Even today Christianity still has its extremists. One Christian leader recently called for the death of a certain South American leader, but was immediately silenced by his co-religionists and made to apologize. The voice of moderation and reason prevailed. In Islam, however, the level of extremism is inordinately high and we never seem to hear the voice of moderation, reason and dialogue. It is always the same old cliche, “Death to the infidels!” Where are the Muslim leaders who can balance and moderate this kind of talk? Are they in silent agreement or have they been intimidated into silence by extremism? I suspect the answer is a little of both. What does this say about the state of Islam today?

Compared to Christianity, Islam is still in its “pre reformation” phase. It is a young religion and it is now acting out like an adolescent. It is acting now as Roman Christianity acted in pre Lutheran times during the inquisition, killing and intimidating all those who would dissent against its world view. Five hundred years ago Christianity was no better, but over time it has matured and changed the interpretation of its sacred texts. Two thousand years ago even Hindu factions fought amongst themselves. Islam, however, has yet to have its reformation and so it has not come to terms with religious pluralism and the secular world. Islam still has no concept of separation of church and state. So I conclude that the Muslim world is in its adolescent phase and, like an adolescent child, it is going to cause its parents a lot more grief before it grows up and is ready to take its place at the table with rest of the adult world.