“To find a form that accommodates the mess, that is the task of the artist now.”* 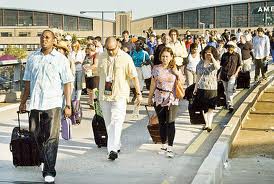 Working with people is messy business. Sit in an airport and watch the endless streams of people move through the systems. It is amazing how much life goes through an airport: Old people in wheel chairs, babies in strollers, big people, small people, people traveling alone, people traveling in groups, males, females, and everything in between, short people, tall people, an endless array of baggage, all with different shapes and colors, an ocean of electrical gadgets dangling off ears and around necks or held in hands. There is nothing standard or regular about life. It squirms and wiggles in every possible direction, and yet all of this has to be processed and packed into the mechanical workings of a modern jet. Amazing!

Running a community is like running an airport. I cannot begin to tell you the number of people problems I had to deal with as head of the Norham project. The need for financial stability was the greatest problem. Not only did I have to look after my own family, it seemed that I had to look after just about everyone else’s family as well. New couples wanting to come to Norham had to have a way to make money and take care of themselves. So Kanina and I did our best to provide jobs, but there were limits. I did not want to replace local farm ladies in favor of devotees. That Marvin and Tucker provided local employment was a public relations asset for our community. If we stopped looking after the local community we would lose whatever dwindling respect we had within the outside community. I knew that ultimately, without the support of the greater community, we could not survive.

It also seemed that devotees had more than their share of personal problems compared to non devotees. I intervened in endless marriage disputes. Families with financial problems almost always have marriage problems. Many times I was called out in the middle of the night to listen to husbands and wives fighting. There was so much physical, psychological and sexual abuse. A typical husband demand went something like this: A distraught husband calls me on the phone at 7 AM in the morning. “Prabhu, (a typical devotee form of address) you have to come and get my wife. We fought all night and my wife packed her bags and walking down the road with my kids. You gotta come and get her off the road and bring her home. She is crazy.” Or a wife shows up on my doorstep at midnight: “My husband has been drinking and he is threatening to beat me and the kids. Do something”! Or even better, two wives call me up fearing that their husbands, who are fighting with each other over a goat that went into the others garden, would seriously harm each other. I arrive at the scene just as the police pull up and so have to explain to the police why these two members should not be arrested and taken away.

Then there were the crazies. Somehow religion attracts the strangest, most eccentric and outright mad people. I learned so much about human nature and I saw so much of the under belly of humanity. One night I had to rush over to one member’s farm after his wife called me in a hysterical state: “He’s been smoking pot and drinking and now he is in the barn preparing to hang himself.” I arrive just as he is putting the rope around his neck and threatening to jump off the upper beam of the barn. I then spent the next 5 hours hearing the life story of this poor man and how his parents abused him. In the end he came down off the bean in tears as we hugged each other. I have talked more than my share of suicides down from the ledge! A devotee hanging himself in his barn was all we needed to help our public relations! Anna, have you ever have an old uncle with a big gray beard full of pieces of stale tobacco and old food? Have you ever put your fingers into this uncle’s beard? If so, you know what being a community leader is all about. I had to put my fingers into the thick dirty beard of so many devotee’s lives. People’s personal affairs are a tangled mess. There are demons and skeletons everywhere.

Having to intervene in all these personal affairs just about sucked the life out of me. My life looked pretty good compared to most, but in truth I had my own demon to wrestle with. A monster was about to descend on me.