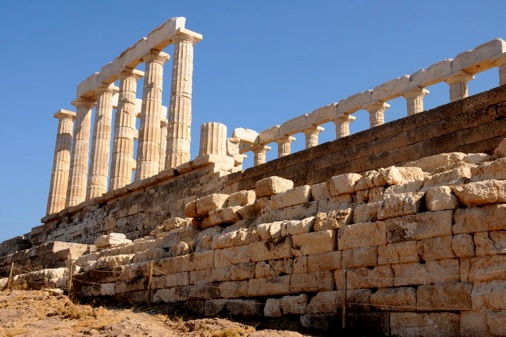 This afternoon I took a day trip out to the 5th century BCE temple of Poseidon about 75 kms east of Athens along the Greek coast. Poseidon was the Greek god of the seas comparable with Varuna in ancient India. It was therefore natural that a temple built to honor him should be found on the cliffs over looking the sea. As with the Acropolis in Athens, many details could be stated about the temple that are interesting, but my main comment has to do with the drive to the site than the site itself. If I did not know where in the world I was, it would be hard to tell if this was southern California or southern Greece.

What only gives it away is the writing script on the store and road signs, but other than this, it is typical beach country with expensive tourist hotels and luxury homes lining the drive along the coast. This is the same as the drive along the coast in Southern France from Nice to Monte Carlo. But the difference here, of course, is that suddenly, seemingly out of nowhere, this massive temple looms up over the horizon as you approach.

My reaction was just like Stonehenge. Where did that come from, and who put it there? In other words, we, the little people, are just driving along enjoying the scenery, minding our own business, when suddenly we are confronted with something completely beyond our daily reality. And then, a few minutes later, you stand amidst these ruins and you are transported beyond time and space. This is the effect of Stonehenge and this is the effect of these ruins. That is why, for me at least, it is important to see these things, to actually visit. It puts a perspective on life that is impossible to gain in our daily routines.

In this regard I especially liked our tour guide’s instruction before we arrived at the site. In a serious tone she reminded us that we would soon be standing in a temple, on sacred ground, in a place where pilgrims had been coming for thousand of years to get just a little closer to God. This changed the mind set of everyone, and sacred indeed it was. Having come to place like this and seen the majesty of world class architecture and art it is hard want to fight over trivial things in one’s daily life.

By the way I also saw the one of the English languages most famous and respected poets was also a person who defaced sacred temples. I saw Byron’s name carved into the column of this sacred and ancient temple.

There must always be a story. So here is a quick note on the legend that surrounds the temple of Poseidon: Cape Sounion was the spot where Aegeus, king of Athens, leapt to his death from the cliffs near the temple, thus giving his name to the Aegean Sea. The story goes that when Aegeus anxiously looked out from Cape Sounion for his son to return from Crete, he despaired when he saw a black sail on his son’s ship instead of a white sail. This led him to believe that his son had been killed in his fight with the dreaded Minotaur, a monster that was half man and half bull that lived on the island of Crete. The Minotaur had been confined by its owner, King Minos of Crete, in a specially designed labyrinth at his palace, and every year the Athenians were forced to send 7 boys and 7 girls to Minos as a tribute. These youths were placed in the labyrinth to be devoured by the Minotaur. King Aegeus’s son, Theseus, had volunteered to be part of the third tribute and thereby attempt to slay the beast. He had agreed with his father that if he survived the contest, he would hoist a white sail on this ship as a sign of his success. In fact, Theseus had slain the Minotaur, but tragically had forgotten to hoist the white sail. Not seeing the white sail as Theseus’s fleet appeared Cape Sounion, the king in desperation jumped to his death on the rocks below the temple of Poseidon.