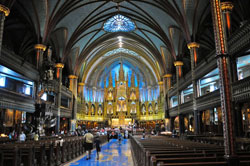 Montreal is all about being French in an English speaking universe. Montreal and Toronto are the two largest cities in Canada. They are both on the Great Lakes waterway and they are only about 750 kilometers apart, and yet they are worlds away from each other. Canada has two official languages, English and French, and if you recall, I mentioned that almost every language on earth can heard on the streets of Toronto; that is, except one, French. This says much about the French and English in Canada.

One trip on the subway in Toronto or one stroll down the main thoroughfare and you can easily see there is no single racial majority in Toronto, but do the same in Montreal and you will immediately see that Montreal is overwhelmingly white and French. The immigrant populations of Toronto do not exist in Montreal to the same extent as they do in Toronto, nor are the streets packed the same way, nor does the economy seem to be booming. Montreal is in disrepair. I’ve never seen so many broken roads and fixes in a Canadian city. In fact Toronto and Montreal remind me of London and Paris respectively. London is cosmopolitan and “modern” whereas Paris is ethnic and a decade behind the times. You can find my notes comparing these two cities else where on this site. 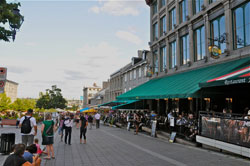 Way to the Old Port

What the French in Canada have chosen to do is to have French culture including its language over economic vitality. The immigrant communities choose not the live in Montreal because there is less money to be made. They choose Toronto or almost anywhere else that is English over Montreal or I suspect anywhere else in Quebec. And so Montreal is decidedly French speaking and white. It is also highly parochial, just like Paris. If you want French culture in Canada you go to Quebec, period. Your standard of living will be less and your children’s future will be restricted, but you will have French culture. Recently I was in New Orleans, which of course is another French area of North America. 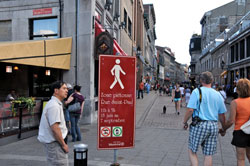 Unfortunately, not a word of French is spoken in New Orleans today. The airport and other civic places have French names, the streets have French names and much of the architecture is French, but no one speaks French. This is because the French in Louisiana chose not to, or could not mandate the French language; so they were assimilated into the melting pot called America. The French in Canada, having more history and more critical mass, could see this coming and so fought to the point of terrorism and near secession from the rest of the country to have special rights within Canada. They brought the country to the brink of either breaking apart or becoming a bilingual nation. In the end Canada chose to be bilingual and to give Quebec special status within the federation. The French in Canada won their fight. This is recent history which happened during the late 1960s and 70s and even into the 1980s. I grew up in English Canada experiencing all of this. It was therefore odd for me to walk down Rene Levesque Boulevard in downtown Montreal.

I remember him being considered a terrorist in English Canada. In Quebec he is a national hero. For my part I am happy that Canada is a bilingual nation and that Quebec is a distinct region within Canada. It seems the Quebecois are also happy with their decision, but there are consequences to all actions and it shows. 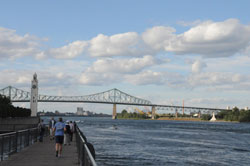 Walk along the boarwalk of the Old Port

The upside to the French in Canada deciding to chose French culture over full integration into the rest of Canada is that French Canada has a special charm that cannot be found anywhere else is North America. Old town Montreal, including La Basilique Notre-Dame, and the old port are huge tourist areas. I was not impressed with Montreal as a whole until I discovered these areas of the city. And now, having been in old town Montreal, I feel I’ve actually been somewhere. When you travel it’s important to go somewhere! I had the greatest time sitting in a cafe in the old port of Montreal speaking french with a waitress while watching the world go by. Just like Paris!

This is the charm of Montreal.