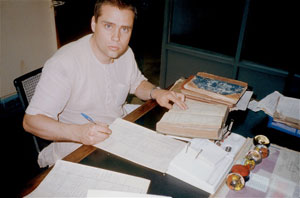 Here is something I learned years ago when I did my doctoral work in Canada. At that time I was studying how old world Hinduism changed as it came into contact with the British first arriving in India during the 18th and 19th centuries. In those days I was fortunate enough to make a unique discovery. I found a hand written manuscript of an autobiography written by a Bengali gentleman who worked for the British Raj as a magistrate during the early days of British rule. I found this manuscript at his ancestral home in a village north of Kolkata (Calcutta). What made the document so interesting was not just the biographical information it contained, but all the details of life in Calcutta during the latter half of the 19th century. He described how the telegraph first arrived in Bengal, how gas street lighting affected life in Calcutta, how rail trolley-service first started, how the region was ravaged by cholera, what happen during the 1857 rebellion in Kolkata, and so many other details that were fascinating for me, a reader removed by almost 175 years and in a culture totally removed from what this gentleman was living. As I read this document each page was like a gold mine of information describing a world that was completely different than my own. In this way I learned the importance of recording information that may seem ordinary and uninteresting, but will, with the passing of time, become invaluable. That is why I have created this site and why I write these notes. I have no hesitation in recording information that may one day become another gold mine of information about the life and times in which I live. I hope you enjoy these notes created during my recent trip to Spain.