My Canadian background is essentially a modified British background and the British, of course, are a polite and “proper” people. And it is true, at least compared to Americans! The moment you board a British Airways flight you experience a politeness in the flight crew that seems out of place, yet we often hear the expression, “the dirty old Englishman behind the door.” The truth is the English, and by extension we Canadians, try our best to make a good show of things. We keep our dirty laundry out of sight and present a public image that is upright and pristine, yet our reality is quite different. We have as many skeletons in our closets as anyone.

Americans amaze me! When I initially arrived in this country I was appalled by how little they hid their skeletons. In fact, they seemed to revel in displaying their dirty laundry in public, and I was easily convinced that these were a barbaric people. Have we not seen many Americans actually bragging about their divorce? Where I came from if someone was divorced it was considered shameful, and one was expected to have enough decency to hide the fact. Here, I find Americans even bragging about multiple divorces! In recent years, I have changed my position and I now think there may be something perversely healthy in telling all, or at least in not hiding the fact.

My first wife was a beautiful Jewish woman from Miami Beach, and to make a long story short I fell deeply in love with her and thoroughly intended to spend my life with her–till death do us part and all the rest of it. This was the Canadian in me. Life, it seems, enjoys making mockery of fairy tales and after eleven years she abandoned both me and our five children for a better life. My heart was crushed beyond comprehension and my life entered a chasm that took years to crawl out of. Before she left, however, she actively campaigned for a replacement wife for me! At the time we lived in New Vrindavan, a rural village of Hare Krishna devotees situated in the hills of West Virginia. New Vrindavan was a spiritual community of a thousand people, and like any village, everybody knew everything about everyone, what the inside of their homes looked like, what food they ate, and almost, what color underwear they wore. This was small town America and this was my first true residence in this country, and at the time I was as Canadian as they come. Life within a this small town America, however, was saturated with Puritanism, at least on the outside. There were strict codes of behavior for almost everything and strong undertones of asceticism. It was within this context that my wife actively solicited a replacement wife, and to “sweeten” the deal she was only too happy to tell all of my intimate details. She was, after all, American. Your ears would burn if I described all of what she told the world.

There is something about my life that wherever I live I become a public figure; so as you see today, in those days, I was also a public person within the confines of that community. I was the headmaster of the school and I had 350 children and 75 teachers under my charge. You can just imagine my horror to find my wife publicly soliciting a new wife and loudly spreading the “glories” of my private life in public! I went through complete humiliation. Not only was I losing my wife, a woman whom I loved dearly; not only was my family collapsing, our children were losing their mother; I was being publicly humiliated. This was one of my darkest periods.

But every cloud has a silver lining, as they say, and I learned something astounding from this experience. After all had been said, after the dust of intrigue and public humiliation had settled, after there were no longer any “secrets” to conceal, and after I had been thoroughly aired, this public spectacle reached a point where it became a dead issue. I became bullet proof! Nothing more could be said to hurt me and yet life still went on. In time the shame even faded and I became somewhat healed, at least in my public persona, and what I learned from this ordeal is that there is strength and freedom in having no privacy. I am therefore, no longer concerned with what people know or say about me. I have been through the fire of public scrutiny and I have survived. This however, is not a path I recommend for everyone. No one in their right mind should follow my course, but for me it became an unavoidable fact of my life and I have learned to turn it to my advantage. Perhaps in these days of digital communications it is in one sense unavoidable anyone, but for sure it is for a public person. At any rate, as you read these passages and perhaps gasp at my lack of desire to hide my personal life, you now know the history behind my decision to write these pages.

Yet there are deeper motives behind my apparent lack of concern with privacy. 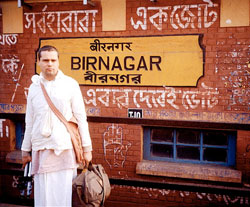 I have a mentor, Kedarnath Datta Bhaktivinode, whose writings have profoundly affected my personal life for many years now. Years ago, as I did my doctoral research, I travelled to Bhaktivinode’s ancestral home in West Bengal India and to my utter delight discovered a handwritten manuscript of his autobiography in Bengali. Bhaktivinode had written a long private letter to one of his sons describing the details of his life. I photographed and translated this manuscript and later found a single published edition of it at the India Office Library in London. This autobiography showed the human and personal side of a great religious thinker, how he managed his career, raised a family and grappled with the issues of modernity while living a religious life.

Consequently, this autobiography became a great source of inspiration to me as I grappled 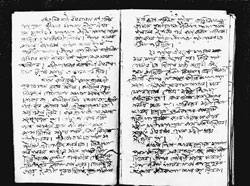 with my own issues of modernity and old world Hinduism, with secularism and spirituality. Had this honest and bold document not been available, I would certainly have had a more difficult time achieving this much needed integration in my life. Bhaktivinode’s autobiography not only included his private thoughts and activities, it also described the topical issues of his day including interactions with his colleagues many of whom became famous in their own right, men like Bankim Chandra, Keshab Candra Sen, Debendranath Tagore, and others. It also described how gas street lighting first came to Calcutta, how the telegraph and the railroads arrived and how they changed life in Calcutta. It gives a first hand account of the 1857 rebellion and describes the huge controversy over sati (widow burning) that raged throughout Bengal during the late nineteenth century. 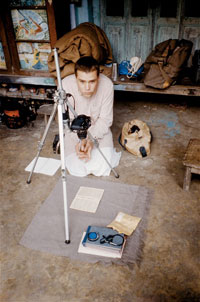 And here I was, a hundred and fifty years later, a person from another time and place, looking back into time and seeing life through the eyes of this great soul and gaining insight and help in my own life. In this way I learned the value of leaving a written history. I also learned that what seems trivial and mundane now may one day assume larger historical significance and help readers that I cannot even imagine. For this reason I am leaving behind a record of my struggles and my solutions, as well as my descriptions and comments on the topical events of my time. I hope my writings will stand as a guide for those who would follow a path similar to mine.

And there is still one more reason that I am creating these installments. They are a personal therapy and an attempt to hone and sharpen my thinking. When I take the time to go through my thoughts and collect the photos of past days and feel the joy and pain of my personal struggles, it gives me an opportunity to revisit and re-assimilate my emotions and my thoughts. I find this hugely therapeutic. It raises ghosts from the past and allows me to process them from a new vantage point and put them to rest, once and for all. When I record my views on the big questions of life, God, religion, and science, as well as on the smaller topical issues of these days, marriage, abortion, capital punishment, and politics my thinking becomes clarified. I create an informed opinion for myself that I can draw upon whenever I am asked for my views on these subjects. It also allows me to clear my mind, for my opinions have been worked through and written down. Writing matures the mind, and by publishing on the web I can also receive the comments of others, which allows me to change and republish my views in an instant if new points of views demand that I alter my opinions.

And finally, what I have learned most of all, is that writing is my greatest joy and therefore I write to feel this joy.