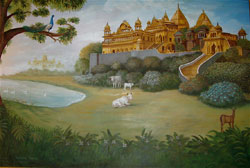 After sitting and listening to Kanina and Gaudiya, allowing myself to be updated with the recent affairs of ISKCON, the thought ran through my mind that Krishna was giving me an opportunity to do some service and I should seize the opportunity. The idea of establishing a farm community, of buying land and developing a New Vrindavan type community, was exciting. The myth of Walden ran deep in my veins. I had no idea how to do this, but my immediate reaction was, “Oh boy, a challenge, a project!” There is a side of me that always wants to rise to a challenge, and the more challenging, the better. I felt intrigued and excited by the idea of establishing a rural community of devotees in eastern Ontario.

Kanina could fire pottery in a most beautiful way and he had become famous in the local area as a potter. As far as devotees went he was somewhat established in the material world and had some practical understanding of things. Without Kanina I would not have untaken this community project, and so we joined forces. He became my right hand man. He and his wife, Dhamayanti, rented a house in the local town of Warkworth and used their garage for his pottery business. Gaudiya along with his wife, Lilashuka, moved in with Kama Nagari and I. We had an extra room so we allowed them to move in with us and work for Marvin and Tucker. Lilashuka took over the book keeping and Gaudiya became my driver and my “goto” man. Our house also became the first community temple. This was a big mistake. Having devotees living in our home and making our house public property put tremendous strain on our family, especially with Kama Nagari being pregnant. We set up an altar in the living room and started a morning spiritual program at 5AM, complete with Mangal arati, Bhagavatam class, japa and even a Sunday program. Looking back on this now and knowing my private nature makes me wonder why I permitted such a state of affairs to occur. I was still in graduate school and, while running Marvin and Tucker might be justified in the name of making a living, taking on the additional responsibility of a community, and then to top it off making my house into a public temple, was insane. What was I thinking? Perhaps both Kama Nagari and I felt guilty that we were not doing enough spiritually. ISKCON was a “hot” organization that demanded action and commitment from its members and in the last few years we had slipped away and were just making a living, coming to terms with the material world. We were spiritually hungry, and now that an opportunity was presenting itself to do something directly spiritual, we felt obliged to take it. In fact we seized the opportunity. We called our new community, New Varshana, after Radha’s birth site in India.