Paris is the city in which one loves to live. Sometimes I think this is because it is the only city in the world where you can step out of a railway station—the Gare D’Orsay—and see, simultaneously, the chief enchantments: the Seine with its bridges and bookstalls, the Louvre, Notre Dame, the Tuileries Gardens, the Place de la Concorde, the beginning of the Champs Elysees—nearly everything except the Luxembourg Gardens and the Palais Royal. But what other city offers as much as you leave a train? * 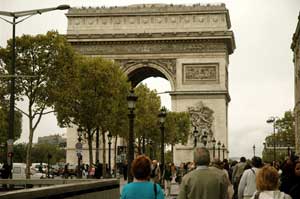 As an American visiting France it is a must to walk along the Champs-Elysees up to the Arc de Triomphe. This one street and this single monument alone ignite the magic of being in Paris for the American mind.

It is like visiting Times Square in New York for a European. It is just one of the “musts” while traveling in Paris. I was overwhelmed by the magnitude of the crowds as I made my way along the Champs-Elyseest. I almost had to fight my way through crowds at times. I was taken a back by the large number of car dealerships on such a street. The amazing thing was how an upscale dealership like Mercedes or BMW can operate through just a single storefront. In America a single dealership alone covers a whole block. Two or three of them in a row cover many football fields and here I was passing Mercedes, BMW, Peugeot, Citroen and Renault in the same time it would take me to walk past five MacDonalds! Who in North America can imagine BMW flanked on both sides by trendy furs and jewelry shops? Even a single car dealership in Times Square, let alone half a dozen, is inconceivable. Europe and America are so different!

The Arc de Triomphe is positioned within an extremely busy traffic turnabout at the top of the Champs-Elysees. You don’t dare cross this traffic circle. Instead there an underground 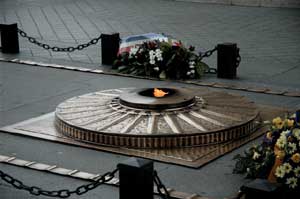 passageway that connects with the Metro that crosses over to the monument. Until I climbed the stairs and emerged under the Arc de Triomphe I never knew what this monument’s purpose was. It is a war monument complete with an eternal flame! I saw dozens of French war veterans manning their posts around this monument with great devotion. This is a sacred site and they stand proud. As North Americans we fail to understand the proud nationalism that exists in France. I did not feel this as much in Italy as I did in France. In France the feeling is decidedly militaristic. Evidence of past war glories pervades French culture and the city of Paris is a virtual open museum to war history. The Arc de Triomphe stands at the top of the Champs-Elysees and rules over all of Paris as the king of all monuments in a city of monuments. The hand of Napoleon is everywhere.