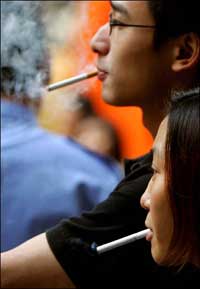 Here are my conclusions regarding smoking in Europe. There are huge cultural forces at work. In the US smoking has been attacked in the law courts for almost 25 years and mostly they have lost. Huge advertising campaigns have been waged against the smoking industry. I have seen one television ad that goes “Would you kiss a smoker?” It shows a non smoker man attempting to kiss a smoking woman. He almost does it, but can not because of the smell. He then leaves her for a non smoking woman. You see them in a “french kiss” at the end of the ad.

The courts have made the smoking industry pay for these kind of ads, and there are many. Packages of tobacco even have to have a warning label on them stating that if you smoke you may die or get some horrible disease like cancer or emphysema. It is amazing to see this. The courts have forced them to do this (BTW the alcohol and the firearms industries are also being attacked in a similar manner in the US) Doctors and all medical institutions speak out strongly against smoking. As a result much government legislation has been made against smoking. It is now not permitted in most public places including schools, subways, restaurants, bars, taxis, trains, airplanes, on public beaches and even in the streets of some cities. With so much propaganda against smoking it is no wonder that the cultural perception has changed. It is now “uncool” to smoke. You still see smoking in the movies, but even this is changing. Years ago even my mother and father and other adult members of my family smoked. In other words, respectable people smoked. This is what I see going on in Europe today. Europe seems about 15 years behind North America. It is still “cool” or sexy here. As I write I am seated in a first class train compartment with a respectable gentleman in his 60s. He is from Belgium and he lives in Italy. It is obvious that he is educated and yet he has just gone outside to smoke. I have seen this many times in Europe.

In the US and Canada, who are the people who still smoke? Mostly adolescents who are naturally rebelling. It is “cool” in their world, but if they do not become addicted they will grow out of the habit. In general lower class and uneducated people still smoke. Other groups who smoke are from the ethic communities, people from Mexico and South America and Europe. They come and bring their habits and pass it on to their children. It takes a few generations for these people to “Americanize” and drop the habit. I know of no one who smokes.

I still maintain my position on this matter. Smoking is not “cool.” It is unhealthy and it is unclean. In Paris I watched a cook in a restaurant smoking as he was cooking. Ashes were falling into what he was cooking. Ah, the secret of French cooking! lol