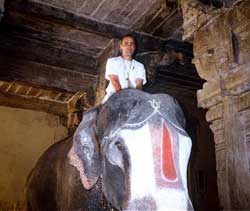 I traveled to Mayapura via bus today, a 4 hours 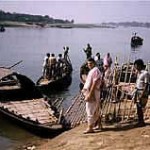 trip. I am so glad to get out of Calcutta. Three days was too much. Both Gaur and I have so much mucus from all the smog. It will take three days to get the crud out of our heads and lungs. I took a dip in the Ganga today, that will be my only dip. There’s no time. Tomorrow we will go to Birnagar for filming. First we will catalogue the collection and then film what we want. If we get in at all we may be there for a number of days. After that we will go to Shantiniketan, then to Midnapore, then back to Calcutta. Went to Priya’s appearance day festival in Navadvip today. We have seen a lot of non ISKCON Vaishnavas on this trip. It creates a good perspective. 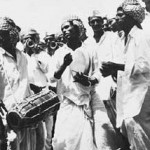 Mayapura is a fantastic project. It has huge elephants, gardens, guest house, gurukula, zoo, shops. It’s actually very impressive, the samadhi is fantastic, all they have to do is finish it! But the scale is monstrous. I have to admit that now I feel somewhat over wrought have not eaten or bathed in 2 days. I am totally filthy. Travelling is very difficult. The train from Calcutta to Navadvipa was a coal steam train. You get all the ash and soot on you. The trip from Delhi to Calcutta took 27 hours and a fine 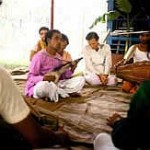 dust gets on everything. The crowds at Howarah and Calcutta plus that Navadvip train were exhausting. Seeing Vrindavan and Mayapura and Bombay temples really makes you appreciate Prabhapada’s vision and all three of these places are unbelievable. Daily thousands of people are coming. All over India people know these places. The Mayapur guest house alone is huge. There is no doubt that Prabhapad was building a house for the whole world to live in.