January 1983
It is difficult to remember the details of these past times. They were dark days. Kama Nagari was regularly going to West Virginia. Sometimes she would take the children and sometimes she would leave them back. She was developing relationships in New Vrindavan and she was hell bent on moving to New Vrindavan with or without me. For sure she was making plans that did not include me. In those days it was difficult to understand how to act. There were no boundaries between family, business, and community. It was one big sea of trouble and turmoil. Looking back on it now I see the importance of what I was actually doing in terms of developing the community. The concept of buying a town to solve zoning problems, making individual families personally responsible for themselves and the idea of spiritual capitalism instead of spiritual communism was radical. I was doing it, yet I couldn’t fully appreciate it. All I could see was my marriage and my family collapsing all around me. There was little space to see a bigger picture. Once I decided it was impossible to prevent Kama Nagari from moving I was forced to decide whether to stay or to go. In the end I decided to move to West Virginia to keep the family together. I opted for family instead of community. No doubt that was the responsible choice, yet from another perspective it was a mistake. I wanted the chance to demonstrate the model of spiritual capitalism, which had the potential to help a lot of people. Given the time to mature it would have done a lot for Krishna consciousness in Canada and throughout the world. But this was not to be. Once I decided to leave for West Virginia it was the beginning of the end of the Norham community. It was a great loss, and even to this day there are regrets. I left down a lot of people.

My final months in Canada are still a blurred to me. I don’t remember how things went once we decided to leave. I went down to West Virginia and consulted with Bhaktipad, and together we decided it was best for me to leave. He offered me a house and a position in New Vrindavan. That helped a lot! It gave me focus and hope. I had a direction and a place to go. Having a private house in New Vrindavan was no easy matter. Few devotees had such luxuries and here was I was being offered such a thing at the outset without any local seniority. I was also offered the position of headmaster of the school. Again, that was a high position in terms of the local community. It was also something appealing to me. I had no innate taste for business. It was a side road that I had fallen into. Scholarship and education were my true interests. So here was an opportunity to develop a school system. It was appealing in the extreme. Together these were the factors that contributed to my decision to leave Canada.

From the passing of one thing comes the birth of something new. Once the Canadian temples knew I was leaving, they understood it would be the end of Bhaktipada’s interest in their zones. Devotees arrived from all parts of Canada. I remember the temple presidents from Montréal, Toronto and even as far away as Vancouver, along with the local GBC converging on our temple community in Norham. They made plans how to develop the community. I remember moving our temple deities into the church building. I remember Marvin Tucker moving into the rented building in Campbelford along the Trent River. I remember television and newspaper people talking to various devotees in the streets of Warkworth. The word was spreading in the local community that the Hare Krishnas were moving into the area. The local community did not like this at all! During most of this time Kama Nagari and the family were in West Virginia. I was alone in Canada. It was unbelievably painful. I was embroiled in a political struggle between New Vrindavan and the Canadian temples. There were unbelievable business pressures. I felt completely alone. While this was going on I was planning my exit strategy. I went to Peterborough, the local city and filed for bankruptcy. I did this with the help of Kanina. You can’t imagine how ashamed I was. I felt this was the most despicable thing. Bankruptcy and divorce were the two worst possible things, and here I was stepping voluntarily into the first. And I didn’t even have to! My bank was offering me all kinds of encouragement and credit. But it was the only way I could think of to get out of this situation. And I knew that divorce was not faraway. These were dark days indeed.

Two devotees, Rochan and Vyapaka, were planning to take over the sewing business of Marvin Tucker. But I didn’t want to turn it over to them. The business was in a rented building along the Trent River in Campbelford. I had a terrible concern they wouldn’t look after it nicely and the people in Toronto, my mentors who had lent us our sewing machines, would end up losing that equipment. So I had Gaudiya secretly one evening remove those machines and return them to Toronto. I remember Vyapaka and myself almost coming to blows over this. I remember having no money and being in our house the last days with no heat while the copper pipes were freezing and bursting. It was a savagely cold winter. Kanina and I stayed in one bedroom of the house with just an electric space heater. I tried to make arrangements to move our cows to West Virginia, which involved working with the departments of agriculture in both Canada and United States. It involved expensive vet bills and weeks of quarantine, so in the end I gave up and left without the cows. Gaura Nitai, a Scottish devotee and my neighbor across the ravine took them. I remember having a step van, a kind of delivery vehicle, which I eventually used to drive down from Canada to West Virginia. I remember crossing into the United States at Niagara Falls. I’m not sure how long the community lasted once I had left. I know Kanina came to New Vrindavan not long afterwards. I heard that Gaura Gopal ended up taking the community deities. As a Bhaktipada disciple he refused to turn them over to the Canadian devotees. He considered the Canadian devotees to be blasphemous. I also heard someone burned down the church in the middle of the night. Arson was suspected. No more slippers were ever made. And out of the hundred or so Devotees who were there at our community’s peak, none are there now. I don’t know when, but the community completely collapsed. It was a horrible mess and personal defeat for me. I regret the whole affair.

It is unfortunate there no photos of our temple-church or even our deities or devotees from these days. This was all in the days before digital photography. Besides I had no interest in taking pictures during this time. A great pity. Here’s one photo of Kama Nagari and myself and how we looked in those days. This is us standing in front of our greenhouse. 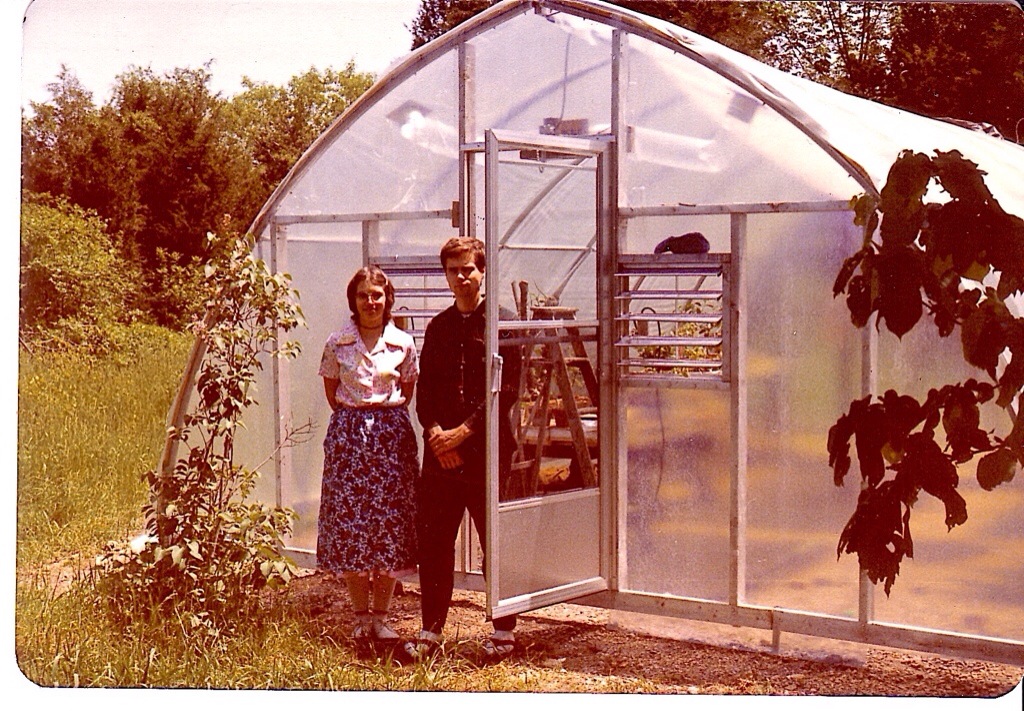