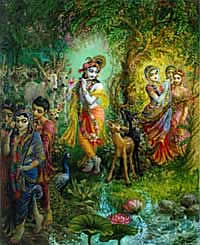 I remember lying in bed late one evening listening to FM radio. I was 16. In those days FM radio was new and many stations were experimenting with different formats. I was listening to an “underground” FM rock station. This was considered avante guard. A lady was being interviewed who was talking about Bhagavad Gita. I was immediately captivated. “My book, she was talking about my book”! This girl was a member of the Hare Krishna movement. The Krishna devotees had just come to Toronto and they were chanting and dancing in the streets. Little did I know that my life was about to change dramatically.

Anna, I have absolutely no India or Hinduism in my family upbringing. I had no friends who knew anything about India or even yoga. Now here, for the first time, someone was talking about Krishna and the Bhagavad Gita! I had to meet these people, but as fate would have it, I was scheduled to leave for the Northern Ontario bush for a summer of work with the Canadian government. My summer job was with the department of Lands and Forest. My meeting with Krishna had to wait.

My father was a great lover of the outdoors. He had arranged for me to spend the summer working in the “great” Canadian wilderness, so I was being shipped off for a summer of government service developing portage trails and cleaning latrines for the park’s department. I was to be paid $5 dollars a day plus food and board in a government labor camp. The place was called Sultan. I have no idea where that name came from, but it was so far out in the Canadian wilderness that there were no roads to reach it, ice remained in the ground all year (permafrost) and the mosquitos where as big as sparrows. And for added measure, there was the curse of the black fly! Black-flies are horrid creatures that make life intolerable in the Canadian north country.

To reach Sultan I had to take a train 1000 kms north from Toronto. This was my first trip away from home. I was a shy and quiet boy and I remember boarding a train at Union Station in downtown Toronto and then being dropped off at the rail station in Sultan at about 4 AM some 36 hours later. I was alone and afraid. I waited alone by the tracks in the fading night darkness and waited.

In a few hours I was picked up and shuttled off to the camp in the back of a garbage truck. I found myself living with a hundred other 16 year old city boys. The camp was an old lumber camp. We lived in barracks that each housed about 35 beds and as you can imagine there was a lot of youthful testosterone flowing through this camp.

Our days consisted of rising at 6 AM followed by 7 AM breakfast. We were on the trails working by 8:00 AM. Lunch was at 12 noon sharp after-which we were back at work by 1:30 PM. We finished by 4:30 PM and then allowed to swim or relax in some other way. The final meal of the day was served at 6:30 PM. Stationed squarely at the front of the dinning hall was a sign that read, “Talking during meals prohibited”! This was a standard rule followed throughout the Canadian north to discourage loggers and miners from getting into fights during meal time.

We were constructing a national park so our work largely consisted of cutting trails, developing beachs, digging toilets and swatting flies. Those damn black flies. They would crawl into your socks, up your sleeves, in your ears, down your neck and gnaw away at your skin until they reached your blood. They would feast on you. And you ended up with bleeding infected soars. Horrible. At night the mosquitoes took over where the black flies left off. To this day I am traumatized by the sound of the female mosquito hunting for my blood in the dark. In order to survive we slept under mosquito nets. During the day we worked with head nets. The screen of my head net blurred my vision and I developed a tremendous headache that seemed to last all summer. I went through a daily spray of DDT, a powerful insecticide that is now banned. It was a matter of survival from these torturous insects.

This is one of the reasons that I love the Southern California desert. There are no black-flies or mosquitos! But I do miss the color green. Anna, here everything is dull brown except for a few weeks in the year when the mountains and deserts burst into a dazzling display of glorious green. The colour green is intoxicating. And then even more beautiful the desert explodes into bloom. Nothing can compare to the desert in bloom. But it only happens every few years, not every year. If there is a lot of rain in the summer and fall, the desert dresses itself up in flowers. It is a glorious sight!

I remember I kept one shirt and one pair of pants just for working. I wore this shirt and pants for the whole summer without washing them even once. These clothes soaked up all the insecticide along with my sweat and became permanently insect repellant. When I returned to Toronto after 10 weeks I remember putting them through the wash. When I went to retrieve them no shirt and no pants could be found. They had totally dissolved in the wash!

Another feature of this summer in the northern bush was the Friday night drunk. Each Friday for the 10 weeks, the camp commander drove whoever wanted to go, which was mostly everyone, into Sultan for a night on the town. This included a rendezvous with a dozen cases of Canadian beer (24 bottles to the case). This cache had been strategically deposited in a field just outside of town. You can imagine this motley crew of boys descending on this brew. This ritual would begin about 6 PM and last until midnight at which time we would be promptly rounded up and herded back into our garbage trucks for the 40 km drive back to camp.

Out of the ten possible treks into town I went on one. Mostly I liked to stay back for peace and quiet. I needed time alone, I did not fit into this group, so the Friday night drunk was a welcome opportunity for some private time. But on the one occasion that I did go on the town-run, I became drunk and made a complete fool of myself. I remember singing loudly while I urinated in the middle of Sultan. This was my first experience with alcohol so it took only 3 beers to cause my undoing. I had a good time.

One of the great things about life in the logging camp was the Playboy magazine. I distinctly remember an interview with George Harrison, one of the Beetles. He was describing Hindu spirituality. If you know the history of the Beetles, you will know that they went through a period in India with a guru. I particularly remember George Harrison reciting the Hindu prayer:

At the time I knew nothing of this prayer. I had never heard it before, nor did I know its meaning. But somehow I inscribed it onto a piece of birch-bark and carried it in my glass case for the rest of the summer. Though I could not go to Krishna back in Toronto, Krishna had come for me in Sultan through the pages of a Playboy magazine.