“In the whole world there is no study so beneficial and so elevating as that of the Upanishads. They are destined sooner or later to become the faith of the people.”* 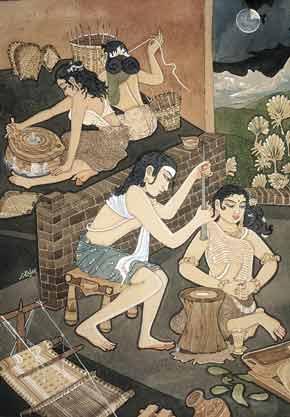 In Hinduism there a most important set of sacred writings called the Upanishads. There is over a 100 of such texts, but in fact only 13 or so Upanishads are read today. They can be purchased at any book store. The Upanishads are mainly a collection of dialogues between various gurus and their students. Later Hindu texts talk about various deities as being God and so we hear the names of Vishnu, Krishna, Rama, Shiva, Durga, and so on. It is most interesting to learn that the Upanishads, which are the oldest of texts, seldom mention any particular deity. Instead the word for God that is used most is Brahman. Literally, this word means “the big.” Sometimes brahman is said to be the sound brrrrrr, a blast of power. The word brahmacharya means “one who follows the way of brahman,” in other words a seeker of truth is a brahmacharya. Today the terms refers to the stage of life between the ages of 5 to say 25, where celibacy is practiced bya student. I have already explained the importance of celibacy.

This word ashrama has two meanings. First it refers to a quiet place for spiritual practice, a place in the forest or desert for example, and second it refers to stages of life; student, householder, retired and the final stage of complete renunciation. Brahmacharya is the student stage of life wherein the student practices celibacy and learns to follow the way of Brahman. In ISKCON temples the brahmacharya ashrama is the place where the unmarried men live. The place where the unmarried ladies live is called the brahmacharani ashrama.