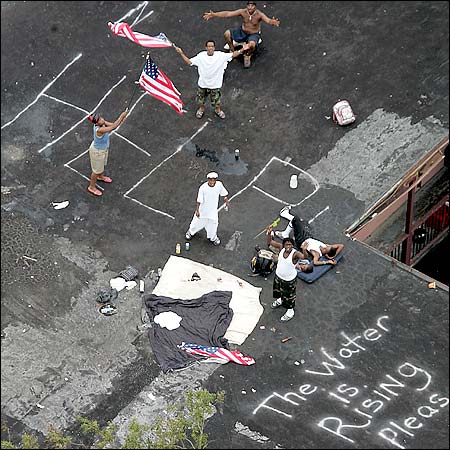 The following is a transcription made of my reaction to the destruction of New Orleans: I am driving to the desert from Riverside and I stop at a coffee shop and look at a newspaper. I see the front page of the Press Enterprise and the front page of New York Times. Both papers show graphic images of the absolute devastation of New Orleans and gulf coastlines of MIssissippi, Alabama, Louisiana. The devastation is unbelievable. This region including the state of Florida regularly gets hit by hurricanes, most small, some medium and a few big. The larger ones usually cause flooding and destroy a few trailler parks. Sometimes even substantial damage occurs, but what has taken place here is beyond anything that we have ever seen before. This is not just a local disaster, it is a major catastrophy for the country.

Most hurricanes have an eye that is 16-20 km wide, so they create a swath of devastation up to 160 kms wide. But Katrina had an eye 350 km wide and cut a swath 800 km wide! The eye of the hurricane didn’t even directly hit New Orleans. It came ashore about 100 kms to the east. Along the coastline whole towns have been lost. The ocean surge that hit New Orleans was 8 meters high! That is a huge wall of water to hit a city! The city of New Oreans is below sea level to begin with. It was not built that way, but over time the ground around the city has raised due to silt deposits while the city was eroded and sunk down. So now New Orleans is a few meters below sea level. Consequently, it is protected by a network of dams that are called levies. Hurricane Katrina has broken some of these levies and now the water is rising quickly throughout the city. At present the city is submerged in 7 meters of water. People are having to retreat to their attics and roofs just to keep from drowning.

The mayor of New Orleans is saying “Abandon the ship, get out of town.” So the whole city of New Orleans is being evacuated. This devastation that we have seen in this area is bigger than anything I can even imagine. All the television, all the radio, all the newspapers are about the destruction of New Orleans, but it’s way more than that. Cities all along the coast are gone. It is like the tsunami that went through the far east and killed hundreds of thousands.

When the World Trade Towers came down in New York I stood and watched in utter disbelief. I just could not believe what I was seeing. To witness so much devastation, so much destruction; I just sat with a sense of awe. “Is this happening? Is it real?” This is the same feeling I get watching the destruction of New Orleans. Imagine a city of millions being destroyed and abandoned. It is going to cost billions and take years to rebuild this region of the country. The loss here is staggering.

Tonight the pictures in the media show unbelievable amounts of looting and raping and beatings in the streets. People are going crazy, stealing things, taking televisions and computers, jewerly, just random theft is going on right now. Tonight the national guard is going to go in and stop it. They will likely shoot people to get it under control.

When a hurricane is going to come ashore there is time to evacuate. So we saw televisions images of hundreds and thousands of cars filled with people leaving the city. All the wealthy people and the middle class people got out. Mostly whites. So the pictures we see are of the people left behind, who could not get out, were not intelligent to get out or did not have the resources to get out. So what’s left behind is basically the low end of the population. And what we see on the television are images of blacks. But I am not suppose to say this. Now the whole thing is going to hell and it’s unbelievable to see all this looting going on.