I have been the father of ten children and I have never been present for the birth of a single one. Now that does not mean that I have been remote or callus. I have been there for my wives, but I have simply never had the desire to watch a birth. I am squeamish! It is not likely, but if I have another one I will watch this time. As a priest, now that I have watched death, I want to watch life. Death is fascinating, so I am now curious to see birth. 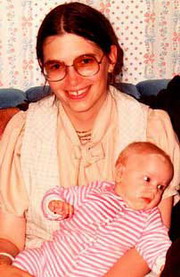 My first son Vrindavan was born on May 25, 1976. This was Kama Nagari’s first child and her labor lasted 36 hours! I remember taking her to the hospital in downtown Toronto. I expected that the whole thing would be over in a few hours. I was not going to watch, but I did plan to stay in the waiting room. However, after the hours dragged on, I thought, “This is absurd, I have to go to school in the morning.” So I went home asking the nurses to call me an hour before the birth so that I could come. That whole night passed and all the following day with no birth. I called the hospital every few hours.

“She is making progress. Don’t worry, we will call you.”

Finally, I received the call around 8:30 PM that evening, “Come, the birth is imminent.” Well, I never made it for the birth, the subway was delayed, but I distinctly remember thinking that the birth was occurring while I was in the Spadina subway station. I even know the time. I remember exactly where I was when I heard the news of Kennedy’s assassination, the first lunar landing, the fall of the World Trade Tower and the birth of Vrindavan. When I arrived at the hospital I remember seeing him for the first time. This is supposed to be a magical moment and I know a lot is made of one’s first child, but my reaction to all the kids has always been rather blase. “Ok, good, let’s go home.” I have never been one to be emotional about the birth of a child.