Within the first week of living with Kama Nagari, after our Dallas Temple “noticeboard 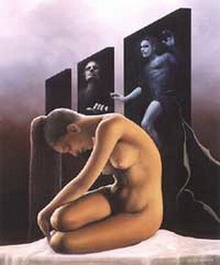 marriage,” I remember being wakened in the middle of the night by Kama Nagari. She was shaking in bed and making horrid gaging noises. I had no idea what was occurring. It was dark and I could only see her from a dim table light. I tried to wake her, but she was catatonic and not breathing. Blood and saliva was flowing from her mouth. Her complexion was blue and her eyes were bulging from their sockets. She was chocking to death! I was petrified. I had no idea what was happening or what to do. Before I could gather my senses and even begin to think what to do she relaxed somewhat and began to breath again, but she was still not conscious. Then with blood all over her face she started to get. She looked like a ghost and she was making haunted sounds. I was beside myself in terror. I tried to restrain her but she was much too strong. It appeared as if a demon was rising in my midst. I was in fear for my personal safety. I thought, “She might attack.” So I stood over her with my fist ready to smash her back if necessary. I was prepared to fight to the death if necessary. I had never met a person with that much strength and I was in real fear. I just did not know what was happening. In what seems like hours she finally collapsed onto the floor and fell into a deep sleep. I will never, so long as I live, forget this incident. I too passed out in exhaustion.

In the morning we woke up to the stains of blood, and when I told her what had happen, she said, “Oh, the demon must have attacked in the night.” “Demon? What demon?” I asked.

“Yes, I am haunted and every few weeks I get attacked by this demon who tries to take over my body. I guess you met my demon.”

I had never heard such a matter of fact reply to such an unsettling incident. This was beyond belief. Had I really faced a demon? It sure looked and sounded like a demon. It was almost a year until I finally discovered that I had witnessed a grand mal epileptic seizure. I knew nothing of epilepsy. I think I aged ten years in my first year of marriage to Kama Nagari. She must have had two dozen seizures in that time. What had I gotten myself into? But the situation was much worse than anyone could even imagine. In my mind there was the distinct possibility that it really was demon possession, for I lived in the medieval world of Krishna Consciousness. A demon attack was perfectly feasible. Anna, unless you have lived with this mind set, where you learned that the earth was at the center of the universe and where the sun was closer to the earth than the moon, you can not know the fear of this world and what I went through. I could talk to no one except other devotees and they, of course, only reinforced the demon possession scenario. I was beside myself in anxiety. Kama Nagari was never conscious for any of these seizures. She never saw what I saw. All she saw was the blood and her mangled bitten tongue. It was only after extreme hopelessness that I finally approached the Epilepsy Society of Toronto for help. I had been forced to reach out.

Chere Anna, I can not tell you how helpful the Epilepsy Society was for me. As I write this I almost cry remembering the support they gave me. And like anything I do, once I get focused, I go deeply into the subject. I read books on the subject and once I got a little knowledge I put all thoughts of demon possession out of my head. I found that as a child Kama Nagari had been fully examined and diagnosed at the prestigious Boston Children’s Hospital. I obtained those records and took Kama Nagari to a local physician to get an anti convulsion medicine. I helped myself immensely, but Kama Nagari continued to have seizures. She would not take the medicine. Why is it Anna, that all my women have this thing against regular doctors and their medicines? I always get involved with “new age” women who look at doctors as demons. For all the eleven years that I was married to Kama Nagari she continued to have seizures although, through various means, we did learn how to limit them to about once a month. I learned to cope. Kama Nagari’s ailment had a major effect on me and greatly affected our relationship. I wonder why I was not told of this problem before I married her? But would it have mattered? I doubt it.