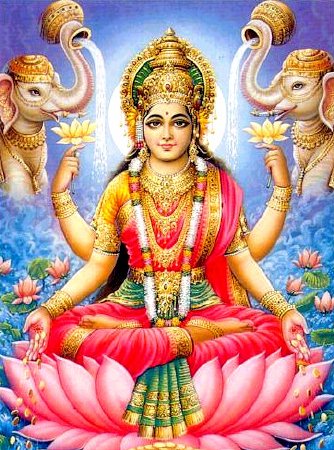 Lakshmi, the goddess of wealth*

“Virtue does not come from wealth, but wealth, and every other good thing which men have, comes from virtue”**

People think that I am a theologian and this is true, but what I also am is an anthropologist, an observer of humanity, The world is my laboratory. Here is what I have learned about God, man and wealth.

Most people assume that wealth is about money, but this is not the case. Money is just one aspect of wealth. Instead, how I see wealth is best captured by the Sanskrit word, “shri.” My dictionary defines shri as: virtue, beauty, grace, splendor, luster, and glory. In other words, wealth is based in aesthetics and, therefore, any abundance of these or similar qualities constitutes wealth.

One of the things that I like about Hinduism is its ability to personify all aspects of life. Consequently, there is a sun god, a moon god, a rain god, a wind god and even a wealth god. In fact the wealth god is a goddess, Shridevi, for wealth is perceived as feminine. Here is the story of how Shridevi came to be. In the early days after the creation of the world, the gods and the demons desired to obtain a divine nectar that could bestow immortality on them. To do this they worked together to churn the cosmic ocean of milk, just as one can churn cream to create butter. Anna, this is a wonderful story that involves snakes and scorpions and poison, mountains, elephants, jewels, gorgeous women and even a divine tortoise and I will be happy to tell you the whole story sometime, but for now, I will just mention that there is a special moment in the story when the goddess Shridevi herself mysteriously rises out of the churning milk. Her appearance is compared to the moon’s appearance rising on the horizon.

Shridevi is beautiful, golden and full. Both the gods and the demons immediately desire to possess her as a wife. One by one she approaches each of the gods and demons to see who could be a suitable candidate to become her husband. But she finds defects in all of them. One has great physical beauty, but lacks patience, another has patience, but lacks knowledge. Another has physical beauty, patience and even knowledge, but is possessed of anger. She could find no one amongst the gods or demons who possessed all good qualities and virtues. Finally, she approached Vishnu, the highest divinity, and immediately found in Him all desirable qualities and virtues. Shridevi chose Vishnu as her husband. In Hindu mythology Vishnu is the husband of the Goddess of Wealth, Shridevi. Another name for the Shridevi is Maha Lakshmi, the Great Goddess of Fortune. (“Maha” means big or great.) Such is the image of wealth and prosperity in Hinduism: a beautiful goddess who stands upon a lotus while gold issues forth from her hand.

Here is another illustration of how personification is used. It is common within Hinduism to see great religious festivals in honor of any God or Goddess. These festivals are called pujas. In the case of Maha Lakshmi, for example, her picture or sacred image will be adorned with flowers, fruits and perhaps even with a money garland. I have even seen hundred dollar bills used! During this festival, her followers will attend and sing songs of praise and glorification. There will be musical instruments and festive dance with dollar bills liberally thrown into the air in a joyous mood. It is a wonderful occasion that may last long into the night. What I find most interesting about this kind of puja is that during the celebration, little girls, all dressed up in beautiful costumes and jewelry, will be lined up in front of the Goddess and worshipped alongside Her. They will be honored with money, sweets, little toys and other things that appeal to little girls. These little girls are perceived as “Anu Lakshmis,” little Lakshmis, and the worship of them is non different from the worship of the Maha Lakshmi, the big Lakshmi! What a wonderful thing to see.

Anna, just think of what power this gives. If a little girl is an anu manifestation of wealth, then why not any other things of beauty: a wife, children, animals, gold coins, a luxury car, a beautiful home, jewelry, art, dance, music, the list is endless. And if all these things are perceived as feminine then they must also be possessed of a feminine nature. So how can you attract them? Why not in the same way a man may attract a woman? Do you see where I am going with this? In the story of the appearance of Maha Lakshmi, Shridevi went searching for a suitable husband, but She only picked the one who had the best qualities. What highly qualified woman would want to marry a miserable, cheap, mean and uneducated man? And so if miserableness, cheapness, meanness and ignorance are qualities that will not attract Shridevi, then their opposites, positiveness, liberality, kindness and education are qualities that will attract Shridevi. In other words, the qualities of shri attract Shridevi! Nothing succeeds like success. Therefore, if a person wants to have wealth in his life, then become educated, adopt a positive attitude, be liberal, wear nice clothes, be kind, collect art– adopt all of the qualities of sri, have an aesthetically pleasing lifestyle, and wealth will come. Wealth attracts wealth. Or to put is another way, become little Vishnu and little Lakshmi will be attracted! This is the secret to acquire wealth.

When I was recently in Paris at the Louvre I came across a huge statue of the Greek god Zeus, deity of thunder and lightning.

I was completely taken aback by the magnitude and majesty of this wonderful image and so as I moved on from this god to another place in the Louvre I felt compelled to tip my hat in respect. In a similar way, I remember standing at the foot of a huge Sequoia tree in Northern California and thinking I should show my respects to this tree by bowing down. This Sequoia tree was 5000 years old and had a trunk diameter of over 10 meters! It was big enough to drive a transport truck through. A Sequoia is an unbelievable living being. You feel you are in the presence of a god when you stand before one.

India has another great mythological story, the Ramayana, This is a story of the God Vishnu, who descended to earth as Rama. A great ten headed demon named Ravana kidnapped Rama’s wife, Sita, who was none other than Maha Lakshmi Herself appearing in another guise. Ravana wanted to forcibly marry Sita, so he stole her away and kept her in this kingdom. Ravana was trying to possess all the enjoyments and powers of life in the form of Sita, without acknowledging the real owner of wealth, Rama. Consequently, he was eventually killed by Rama. The Ramayana is one of the world’s greatest epics and should be read by all. The Ramayana is teaching that we should not become little Ravanas trying to enjoy the world without acknowledging the real owner of wealth. This is where the principle of tipping the hat comes into play. At some level there must be an acknowledgment of the source of wealth if wealth is to be rightfully sustained, otherwise we are a thief.

Anna, as I write this I do not want to convey the idea that this is some magic formula for becoming rich. I am not describing some means of ritualized piety that automatically leads to wealth. There are plenty of mean people in this world who have great wealth and do not believe in God, and similarly, there are plenty of God fearing people who live in abject poverty. What I am talking about here is an approach to life that I choose to follow. I have told you that I do not believe in sky gods, and yet I do accept some underlying principle or divine mystery in life. So for me the hat tipping principle that I naturally feel when I see the the image of Zeus or stand before a Sequoia or that I have learned from the myths of Hinduism, is how I choose to live my life. This approach is my way of integrating myself with the universe. It is my way of “being” in this world.