The Palace of Knossos and the Minoans

This morning we docked at Crete, fifth largest island in the Mediterranean. I was not impressed with this island. It appears dirty and in disrepair. Of course this kind of observation is made from a bus window and a few short street walks. Heraklion, the capital reminds me of Tijuana Mexico. Sorry to say. Mykonos, Kusudasi, and Patmos are spotless by comparison. Crete is more like the mainland, which of course makes sense because it is a much larger island with a population approaching three quarters of a million. However, the island is full of history, the chief of which is the legend of King Minos and the Minotaur and the Minoan civilization (2600BC – 1400 BC). The myths are very much like the Hindu myths, full of licentious activities between gods and humans. The minotaur is the result of sexual relations between a human queen and a divine bull. And it is said that in order to contain the minotaur, which turned out to be a very ferocious beast, it was thrown into a labyrinth on the island of Crete. The palace of Knossos is thought by some to be the labyrinth because it has over a thousand inter-connected rooms.

Crete is the island of the Minoan people, who used the bull as their symbol. It appears to have been a matriarchal culture. Symbols of the Great Goddess abound. I also see the symbol of the bull and axe throughout this site. We took an extensive tour of the Palace of Knosses, which was excellent. I have photos. For me these ruins are not anywhere near as spectacular as Ephesus, but they are older. There is nothing biblical about this tour. The palace of King Knossos apparently had five stories and over a thousand rooms as we mentioned. One of the most striking feature of Minoan architecture are the inverted wooden columns, just the opposite of the typical Greek column with is wider at the bottom and thinner at the top. These are just the opposite. We were told that the inverted column provided some extra degree of earthquake protection, but this makes no sense to me. The palace and Minoan culture in general seems to have be repeatedly affected by earthquakes and even volcanic eruptions which are common on the island of Crete and throughout the region. In fact such events may have led to the demise of the Minoans. There is evidence that this palace itself had been completely destroyed at least twice from earthquake and fire. Walking around in these kinds of ruins is actually hard work and rather tedious (boring) unless you know the background of the culture and understand what you are looking at. After a while one ruined civilization looks like the next. All this kind of tour work needs preparation, but of course it is good to see once. It puts your own life into perspective. Here we are looking at remains almost 5000 years old! What will New York or Los Angeles look like in 5000 years? 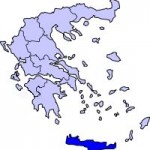 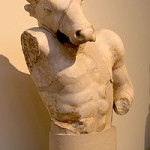 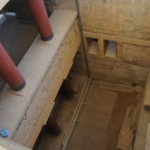 The Palace of Knossos once stood 5 stories high. View looking down thru the stories 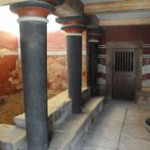 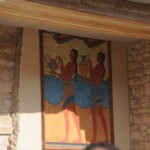 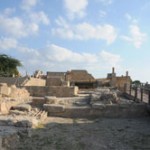 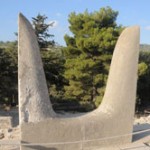 Horns of the Bull, symbol of Minoans. right side reconstructed 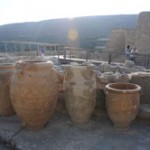