Made our first ports-o-call at the island of Mykonos. Basically it is a wind swept nothing of a place that has grown up as a result of tourism and has become famous for nightlife. It is described in our tour guide as the “Ibiza of Greece” and a famous spot for gay culture. I saw no evidence of this, however, the place does have charm, a lot of it in fact. In Greek mythology Mykonos was the location of the battle between Zeus and the Gigantes, and the island was named in honor of Apollo’s grandson Mykons. Today about 10,000 people live here. Drinking water comes from desalinization. We were given just three hours to walk through the streets of the main village, just enough time to catch a snack and snap a few photos. Mykonos is a party island and as far as I can tell there is no history here, but I enjoyed my short visit just the same. It was my first island stop and a chance see a place that was very different and full of charm. Hopefully my photos best capture the feel of this place.

Here is how a cruise works. Partying seems to be the name of the game. You travel for a few hours on the sea, the boat arrives somewhere, anchors off shore and you are shuttled to the dock by a smaller boat. Then you are bused into town where you walk around for a few hours, hopefully buy a lot of stuff, eat something and then return to the boat. Many stops include a bus tour or two. This is the scenario that we will repeat for the next few days. This is not my preferred way to travel, but it did allow me to see a lot of places that I would otherwise never see. During this trip I went to Mykonos, Kusadasi in Turkey, Patmos, Crete, Minos and ….. But a cruise is a lot more than just stopping at exotic islands or ports, it is about eating, drinking and partying which is best done with a partner, preferably female, but since I am alone I feel out of place. However, being alone does allow me to concentrate on photography so I am able to spend time working a few subjects, experimenting with the camera, thinking about the composition and the lighting. In other words, actually doing photography instead of just taking pictures. Just to have the time to do this makes everything worth it. I get to little qualitity time to myself so I am happy to have this opportunity. Have I captured a little of the charm of Mykonos?

Tomorrow our first stop will be in Turkey a place called Kasadasi, the place where the Virgin Mary lived in her final years, at least according to Roman tradition. I am looking forward to this. A new country! Turkey is on my list for future trips so this will be my introduction. 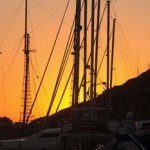 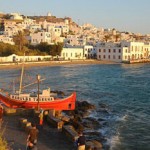 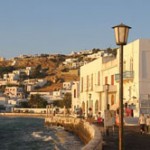 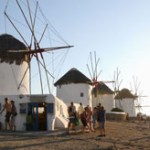 Old wind mills on the island of Mykonos, Greece. 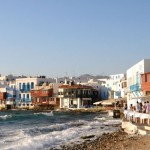 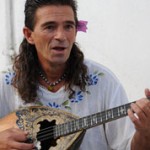