For some inexplicable reason I made no onsite travel notes for Santorini, but this place, beyond question, was the most beautiful island I have ever visited. Terrible oversight, however, I have a good memory and plenty of photos of my visit.

Sometime around 1600 BC a huge volcanic blast occurred on the island of Thera that utterly shook the Mediterranean world and created a huge caldera (volcanic creator), which has become the defining feature of the modern day island of Santorini. This stupendous blast and subsequent tidal wave utterly destroyed the Minoan civilization on the island of Crete. There is only one word to describe my visit to this island, spectacular! There is no ancient religious history on this island like there was on Patmos, no gay party culture like Mykonos, this island is just a nice place that is all about scenery, plain and simple. You can see from the satellite photo the huge caldera that makes up this tiny island. The cruise ships sail into its natural harbor where you can see hundreds of tiny white buildings plastered all around the top of the cliffs of the caldera on the northern side. There is a cable car that shuttles visitors up and down the side of the cliff and one tiny road that winds its way up to the top for cars and trucks. Most tourist, myself included, are bused up to the top of the volcano and then “cabled” down. There is also a donkey service that I was tempted to try, but for lack of time, I passed on.

The island of Santorini appears to be totally made of pumice in multiple colors, and we were told that the export of this stone used to be the main economic activity until recently (1986) when it was banned because the island was actually shrinking in size as a result! Now, of course, tourism is the main source of revenue for the island. There is also a small wine industry in its initial stages. In recent years a way to grow grapes that uses the natural dew to water the plants was developed and so wine making is also providing additional revenues to the local economy. Water is scare on this island because there are no rivers or lakes. People collect water from their roofs during the rainy season and store it in cisterns, reservoirs of water in the basement of almost every house. In addition, there is a desalination plant that provides washing water to the island from sea water.

Santorini has one other interesting feature. It is the “secret” hideaway for many of the worlds famous people. I am told that Madonna, Tom Cruise and Sean Connery come here to get away for it all. The local people are extremely “possessive” of there famous guest and will not allow poperotzy to come here. I caught a glimpse of George Clooney while I has here. In total I spent only about 6 hours on this piece of heaven. Our bus drove us up to the top of the island and then across the island to the town of Oia where we were given time to walk around, shop and eat. From there we were driven back to the capital city of Fira, and allowed to walk about town and then decide how to descend the side of the caldera, by cable car or donkey. I spent my time visiting an orthodox church and negotiation to buy a local painting oil painting. Then I took the cable car to the sea. Santorini is a place I would like to return to. I met an Australian couple who honeymooned here and return every five years to renew their vows. I can see why. 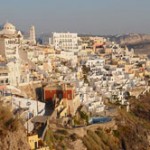 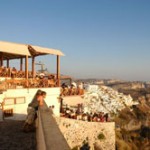 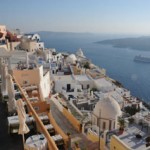 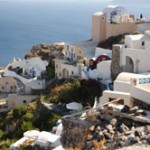 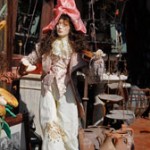 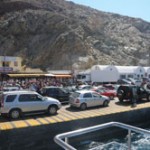 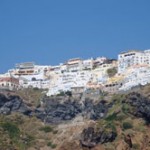 Homes on the cliffs in Santorini 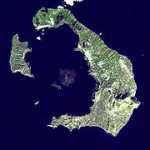 Island of Santarini. The center area of ocean is actually a volcanic caldera.