This morning I took a bus from Athens to Delphi, a distance of about 160 kms. This was a good chance to see the country. Yesterday I saw the coastal area, now I am seeing the mainland. For me, Greece is basically Southern California, complete with smog, heat and spectacular scenery, except that it has “funny” writing. I noted this yesterday as I was traveling up the coast. Take away the signs written in Greek letters and you could not tell the difference between southern California and here. The drive to Delphi remained me of going to Idylwild via the Ramona Expressway near Hemet, except the distance was much farther. The mountainous region that you ascend to reach Delphi (Mount Parnassus) is a little higher than San Jacinto, but not by much. I am right at home in Greece.

This is an agricultural country, which is obvious once you drive away from Athens. It appears to be mostly olive trees and grape vines with just a few other things thrown in that will grow in a Mediterranean climate. It is beautiful scenery, but there is the all pervasive brown haze over everything. Just like home.

Delphi is the ancient site of the famous Delphi oracle and temple to Apollo. Today it is an archeological site with a modern town that serves the needs of the thousands of tourist that come here daily. The site is high up in the coastal mountains; I am guessing, close to 3,000 meters. The views are spectacular. I try to imagine how this place was built at this elevation and in such a remote location. Who came here and how did they do it? Not an easy journey to say the least, especially in ancient times. Of course, the world is full of famous places built in difficult to reach locations, Tirupati and Kedarnath in India are two that come to mind. That they are built in difficult and impractical locations only seems to lead to their sacredness. It is a fact of life that if something is hard, impractical, or even dysfunctional it can easily become perceived as spiritual or mystical if the element of divinity can be added to the mix. I am being a little cynical no doubt, but the famous Monty Python film, “The Life of Brian” keeps coming to mind as I visit these religious sites, especially here at Delphi with the ancient oracles and the geothermal vapors. Enough said. Regardless, these ruins are worth seeing and their remote and gorgeous setting only adds to their wonder, beauty and mystical feel.

For the ancient Mediterranean people, Delphi was quite literally the center of the universe. According to myth, Zeus released two eagles from opposite ends of the earth and they met in the sky above Delphi. As they collided, they empaled one another with their beaks and fell to the ground. The site where they landed was the center of the universe, and in ancient times this spot was marked by the famous omphalos, or “navel” stone which can still be seen here today. The myth of the cosmic navel is common throughout the ancient world. In India we hear the story of Vishnu’s navel from where the lotus sprouts that gives birth to the creator God Brahma. It is from this spot that creation takes place.

The walk up the main road towards the temple of Apollo passes by rows of merchant stalls and a brothel. This was also the case at Ephesus. No town is complete without the brothel. You also see a lot of “votive shrines,” or small sanctuary buildings that emperors and wealthy pilgrims had built as a tribute for the services of the oracle. The concept the votive offering, whether it be a piece of cloth tied to a fence as in the case of the house of the Virgin in Turkey or the construction of a tribute building as in this case, pervades the world’s pilgrimage sites. Apparently Delphi was an important banking center for the Greek world because there is a whole street of treasury buildings established as votive offerings. It is always the case that people want to store their wealth in the presence of God. We saw this in Vrindavan India where sadhus deposit their life savings in the local bank. You can see numerous treasury buildings along the path that leads to Apollo’s temple. The most notable is the Athen’s Treasury building that has been reconstructed by french archaeologists.

Before reaching the temple of Apollo you pass the famous Rock of Sibyl where an earlier oracle related to the Goddess Gaia used to sit. Gaia of course is the famous Gaya or Earth Mother Goddess. Apparently Delphi was a site dedicated to the Goddess before it became a site related to a male divinity. Mother always comes first. The Rock of Sibyl was said to be the place where a sibyl, a priestess, would sit and give prophecy. Later this oracle as relegated to a secondary position after the oracle of Apollo became established. Father always takes over.

As you finally reach the temple of Apollo you can only see a few doric columns still standing, but it is not hard to imagine how majestic and spectacular this temple once was. Perched on this mountain terrace and looking up from the valley below, the view of this sacred temple would have been glorious. The rule, “build it and they will come” surely applied in those days as it still does today. People come here by the thousands each day. There were two earlier temples to Apollo on this site: the first was burned in 548 BC and the second was destroyed by an earthquake. Some archaic wall blocks are preserved from the first temple and many of wall blocks and some pediment sculptures are extant from the second temple.

Just behind Apollo’s temple is a flat block of stone turned on its end with holes in it. This is the famous stone where the female “mouth piece,” an elderly woman called a Pythia, would sit, fall into a trance and allow the voice of Apollo to speak through her. This is the Oracle of Delphi and this woman’s utterances once could change the destiny of nations. The Pythia was not just consulted by leaders of the Greek city states, but by the kings of Egypt and other parts of the ancient world in search of her divine guidance. The small holes were for the legs a three legged seat to fit into the rock. The larger hole was to allow some kind of geothermal vapors (the guide said sulfur) to come to the surface. We are told that the woman would eat a certain kind of laurel herb and in combination with the vapors would fall into a trance. The oracle would then do its work and speak through the Pythia in riddles. Her words would then be interpreted by the priests of Apollo’s temple. This oracle of Delphi was the most famous in the ancient world and functioned for a 1000 years until it was abolished in 393 AD by Emperor Theodosius, who made Christianity the official religion of the Byzantine Empire.

Finally I saw the 4th-century-BC theater, just above the Temple of Apollo. It is apparently one of the best preserved in Greece. It has 35 rows of seats and could seat 5,000 people. The front of the stage was decorated with a frieze of the Labors of Herakles, which I saw in the Delphi Museum nearby. The site at Delphi is one of the best things I have seen. It is well worth seeing! 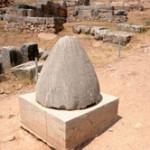 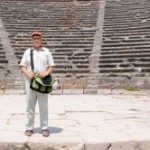 Shukavak at the stadium in Delphi. 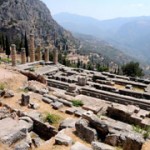 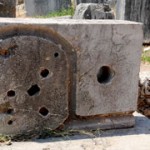 This stone is the ‘seat’ of the Delphi oracle. Turned flat and in the temple of Apollo at one time fumes came up thru the large holewhile a priest sat on the special seat fitting into the smaller holes. 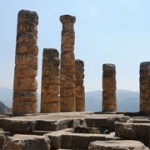 Inside the Temple of Apollo. Only a few of the original pillars still stand. 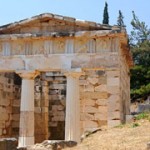 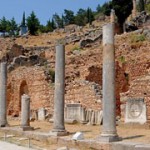 Place for vendors on the way up to the Oracle at Delphi. 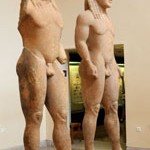