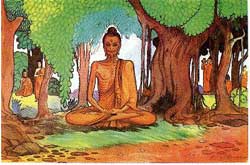 As you know Hinduism teaches that each of us has lived for many lifetimes. This, of course, is the cycle of birth and death, and the process of moving from one lifetime to the next is called reincarnation. This you know. In Sanskrit this cycle of birth and death is called samsara. The breaking of this cycle of samsara is called liberation or in Sanskrit, moksha. There is another word that you may have heard called nirvana. Literally nirvana means extinguishing. When a yogi is able extinguish his life in this world we say he has attained nirvana. Buddhism also uses the term nirvana.

The reason the soul is attached to this physical world and therefore caught in this cycle of birth and death is due to its desire to enjoy this world. We are bound by our desires. So the theory suggests, if you stop desiring to enjoy this world you can become released from this world. Now the question arises, how to stop desire? There are many answers to this question, but one of the more common answers is called asceticism. One dictionary defines asceticism as “the doctrine that through renunciation of worldly pleasures it is possible to achieve a high spiritual or intellectual state.” Not only Hinduism, but many religions accept this idea in whole or part.

Hinduism is not a single religious tradition, but a conglomeration of many strains. However, it is true to say that asceticism is a major component of many of these Hindu strains. Although it took me many years to understand the larger context, the Hare Krishna movement is a form of Vaishnavism (the worship of Vishnu) and it is highly influenced by the practice of asceticism. The idea behind asceticism is that if a person can control the senses by not engaging the senses with their sense objects, the taste for such engagement will eventually go away. If, for example, a person is addicted to smoking, but can avoid smoking, then gradually the need to smoke will eventually melt away. Sometimes the need to enjoy this world is compared to having a mosquito bite. At first the bite itches just a bit, but if you scratch it to relieve the itch, the itch will just increase. The more you scratch, the more it will itch. So in the same way, satisfying the itch to enjoy the material world just leads to a stronger desire to enjoy this world. And, of course, the more we desire to try to enjoy this world, the more we become bound to this world. Therefore asceticism demands that we stop trying to enjoy the world.

In Sanskrit the word used to disengage one’s self from worldly involvement is called nirvriti. Vriti means to turn, nir-vriti means to stop turning. Therefore, the path of asceticism is the path of nirvriti, stopping the turning of the world–the shutting down of life. The opposite path is call pravriti. The prefix pra means to increase, therefore pravriti means to increase the turning of life. I think it is fair to say that ordinary life, especially as it is practiced in our modern secular world, is the path of pravriti. Religious traditions that promote practices such as fasting during lent or ramadan, for example, are promoting the path of nirvriti. Fasting is an ascetic practice.

Most religions have some degree asceticism or nirviti practice built into them. Some more than others. To a certain extent the current struggle between the West and Islam is a clash of the paths of pravriti and nivriti.

Turning to the matter of sex and love it is clear that most religions have trouble in dealing with these basic aspects of life. Sex, of course is a matter that involves great desire and great attachment. Sex is the quintessential driving force of pravriti. “Love makes the world go around” is a famous expression. It is indeed true. So how then to deal with sex and love? According to the principles of asceticism sex must be stopped completely or, if this can not be done, it must be limited, regulated and controlled. This is what marriage is about. Taken to a more serious level, this is what celibacy is about. Anna, I hope you now have a better idea of how asceticism relates to spirituality.